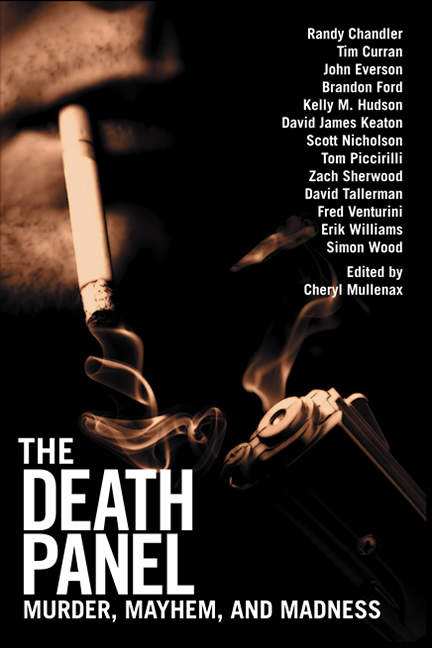 You can light your cigarette with it. Seriously.

So, I thought I’d test-drive this thing by babbling about how I got the idea for my story “Nine Cops Killed For a Goldfish Cracker” (found in the new dark crime anthology The Death Panel up there) because I can’t wait forever for someone to ask me this particular question. Just like the kid in The Commitments who sat in his bathtub rehearsing answers for imaginary interviews, I, too, often sit in the tub and think about The Commitments and what a tragedy the imaginary break-up of that imaginary band was. Five more minutes and Wilson Pickett would have showed, you self-absorbed little punks! Where did the love go? In the midnight hour no less?

The story was originally called “Fish Bites Cop,” and when it’s not in the pages of that anthology, that’s its real name. The longer title was much more trashy and memorable though, especially fitting for the hard-boiled experiment I was attempting, and everyone seemed to like it a lot better. They were probably right. But the original title feels closer to the truth when I think back to the story’s quick and painless birth, conceived as it was while watching Herzog’s slow-as-flies-fornicating masterpiece Fitzcarraldo, as well as pondering what I’d learned in a class where I’d just recently received my first grad school C+ (the grade-card equivalent of a dead fish, apparently, judging by the warning letter I got soon after). See, our teacher, who was in no way to blame for my grade, by the way, (no one will ever believe how grateful I am for that class, I simply didn’t speak the language) he was sooo excited about some of us reading One Hundred Years of Solitude for the first time and told me that if I really, really liked the Spanish galleon on the cover that much (I chose to analyze the cover within an inch of its life because I was petrified of what was actually inside that monster of a book, especially after a daunting family tree on page 1 that would make Tolkien snort beer out his nose) that maybe I should check out Fitzcarraldo some time, a movie about a man who drags a gigantic steamer through the jungle and over a mountain at about 3 inches an hour. For reasons my teacher couldn’t possibly know at the time, this was actually my idea of a perfect movie! I bought the DVD immediately. And it did not disappoint (neither did One Hundred Years, for that matter) but I became especially obsessed with a scene at the beginning of the film where the future-boat-dragging madman looks for some financing for his dream only to have some rich prig laugh at him and toss a wad of money into a pond where a big fish gulps it down. Glorp! 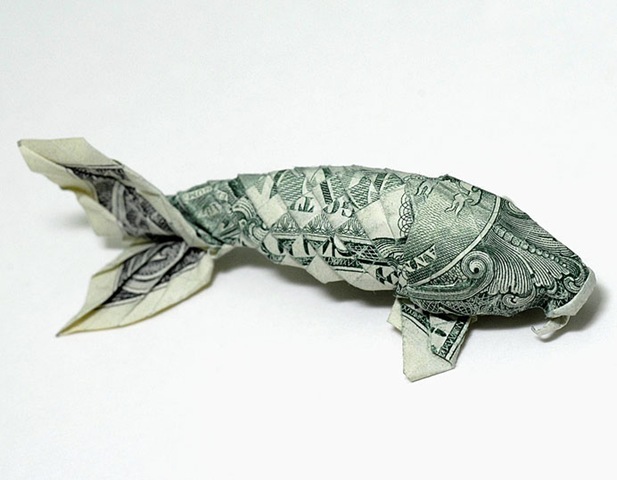 Whoa. I kept thinking how that could be a whole movie right there. And why didn’t he dive in after that cash? And which fish had swallowed it? And how would you know by looking at them? And on and on and on. So then I started thinking of making it the starting line of a classic hour-in-the-life, film noir, race-to-the-finish line deal. And I immediately ran into the problem of having a tiny goldfish swallow an amount of money large enough to induce at least nine murders. This is where the “how many times can you fold a bill in half?” subplot came in, and now me and the hero were off and running. In fact, the question of folding things over and over became more important than the fish at times (I’m told this question of folding money is finally answered conclusively on an episode of Mythbusters). And it wasn’t until my ill-fated final presentation of One Hundred Years of Solitude in that class, where I brought in a bag of delicious goldfish crackers to distract people from my speech’s many flaws (see, tiny gold fish were a key part of that novel, too) that I finally had every ingredient I needed. Oh, yeah, I also came across some excellent advice on a hard boiled website about how all noir protagonists must die.  Think of this not as a spoiler, but more like a heartfelt promise.

And the importance of this cannot be overstated. This gave me the momentum I needed to finish. Understanding the poor clown was doomed, I actually typed as if there was a danger of us both never getting to the end of the story in time. And because of this, I cranked out the whole thing out in just over a week, thinking up ways to kill cops one through nine as I drove to work, then hammering out their demise on the way home. For the first time ever, I actually wanted to get pulled over. I was definitely writing more than fast enough.

I finished the story one beautiful Sunday morning over corn flakes, then, on a whim, typed the search words “humor,” “gruesome,” “crime,” and “circus balls” into Google. Three out of four ain’t bad, and a combination miraculously turned up in a Comet Press call for submissions like a long-lost love. They mercifully snapped up my ugly baby, and I’ve been smiling and dreaming of folding cops in half ever since. Thank you, Cleveland, and good night.