what does this duck know that we don’t?

spiders are our friends > SPIDERBLOG > Uncategorized > what does this duck know that we don’t?

So, I have a story in the debut issue of Pulp Modern, brainchild of Alec Cizak (author of the boiled-hard, futuristic Manifesto Destination), and since most stories usually end up different from where they started, I wanted to try to get in the habit of talking about their messy, bumbling, vulnerable journeys out into the open.

My story “Mosquito Bites” was workshopped at the University of Pittsburgh a couple years back as a chapter of my manuscript/novel/phonebook Spiderbites. The story was originally titled “The Living Shit,” which fellow students thought was a bit abrasive. So I leaned toward “Mosquito Bites” instead as I’d suddenly become obsessed with having every possible type of bite in this book that was suddenly swelling exponentially (from 300ish pages to about 1,300 before madman guru Chuck Kinder chopped it into three equally unwieldy, but easier-to-carry chunks). So there was chapter after chapter of bites in this sucker. Chapters titled “Snake Bites,” Cat Bites,” Shark Bites,” Dog Bites,” “Monkey Bites,” “Fly Bites,” “Lizard Bites,” “Don’t Let The Bedbugs Bite,” and the conclusion, “Bolus” (’cause that’s what happens after you get done bitin’). But the mosquito bites in question (and this was the case with the rest of the chapters/stories) were really something else entirely, needle tracks from shootin’ up, chronic scratchscratchscratching by the hero, all sorts of stuff really. Of course, the needle on this kind of golden, man-made mosquito would be injecting rather than drawing blood. But with either one, there was still an exchange of sorts going on. Google “mosquito” and “defecate” and see what you get. Just make sure the SafeSearch is on. Did you do it? Sorry about that. To make up for that nastiness, Google “coconut crab” instead. There! Happiness! Look at that shit. That dude’s got one crawling up his ribs like a ladder!

But, yes, Pulp Modern. Check it out if you get a chance. It ran up and down the flagpole of the Amazon Short Story Collections bestseller list, getting as high as number 3, nested just under robot boxers and Stephen King. Now, history has taught us robot boxers can be stopped. Mr. King, however, won’t be stopped by anything short of a runaway van, and even that clearly doesn’t stop him for long. But, hopefully, some strangers grabbed a copy and will get to hold my bug bites in their hands. But the book is stacked with all sorts of other stuff that can sell it a lot better than me. Like… 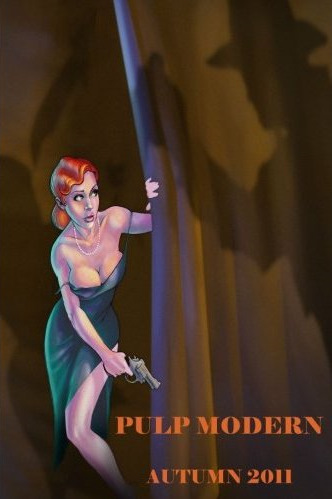 He brought a knife to a gun fight. With a redhead, no less.

And it’s stacked in other ways, too. Lawrence Block starts it all off with “Murder Is My Business.” Yes, I said Lawrence (holy shit!) Block. My favorite line, “Bodies like that should not be wasted on rich old men.” Bodies! Double meaning again. And you’ll notice a couple of song titles in the table of contents, too. “Train In Vain,” by John Kenyon, and “Feel Good Hit Of The Summer,” by Copper Smith. Kenyon especially (the founder of the new Grift Magazine), makes good use of music and all sorts of sensory overload in his twisty little tale. Killer last line, too. There’s also Tommy Pluck’s “Legacy of Brutality” that’s its own oddly touching slice of ugly.

Oh, yeah, the book is divided into three sections. I forgot to mention that. So you get crime like those up there, then you get some freaky fantasy action in the middle, and finally some westerns at the end. The fantasy section has one of my personal favorites in it, Glen G. Gray’s “Disintegration,” a throwback to King’s Night Shift heyday actually (where his horror teetered on the verge of magical realism before anyone knew what to call it). It’s also a great example of Gray’s clinical precision when it comes to horror, a style I’ve dubbed “Cronenbergian Noir” because I’ll say silly shit like that sometimes. There’s also a nutty Kafkaesque dark comedy deal in there called “Omelette du Jour” by Yarrow Paisley. And you know when anyone says “Kafkaesque,” they’re either talking about The Trial or the waking-up-and-turning-into-a-cockroach story. I won’t say which. But it’s not The Trial. And no, homeboy doesn’t turn into an omelet. What else? A ton. Chris La Tray and C.J. Edwards had some good ones. La Tray with some creepy treasure hunting, Edwards with some hardcore sci-fi.

Then there’s the dusty, bullet-ridden final section. Edward A. Grainger (the guy that does Beat To A Pulp actually, he’s got nine more aliases) continues his stranglehold on the neo- western genre with his Cash Laramie sumbitch and the dense, ever-growing mythology around this character. It’s an impressive world he’s weaving, seriously. And Jimmy Callaway adds to his list of hysterical story titles with “Billy Clanton, You Take Off Them Boots Now!” Callaway gives us a version of the events at the O.K. Corral through the eyes of one of the forgotten, most easily dispatched of the villains. I love stories like this, looking at history (or myth) from a different angle, over there, peeking out from behind that horse’s legs.

And I got one peeking out in there, too, like I said. But I should probably come clean about how all that talk of spider bites and mosquito bites earlier was really just a smokescreen for what I really wanted to do, which was chronicle the most believable beating someone could deliver and receive. But I won’t. There’s a reason this is the closest thing to realism I’ve done lately, and that’s a reason I’m going to duck right now all cowardly-like with some misdirection. But first, speaking of ducks! I was just in a corn maze earlier today, and they had this duck crossing sign that was mesmerizing (probably not a good quality for a warning sign). See, one of the ducks was flipping out on the sign, losing its mind or something, and they painted it on there as if this happens every time they cross the road. Or maybe it’s trying to distract the other ducks from something horrible? Who knows. Does this really happen every time though? It must if this image made it onto this sign and is instantly recognizable to motorists everywhere as your typical parade of ducks. Hell, I would believe it, and I’ve only seen two duck parades in my lifetime. So this image will stand as accurate. Until someone can prove otherwise.