I haven’t updated in a bit, so let me get the shameful self-promotion out of the way first and kill nine birds with one stone. Or, better yet, with a deluge of purple hyperlinks! First up, a couple things on the horizon:

“Greenhorns,” my dream of a better, more lethal version of Deadliest Catch, will be coming out soon, “Three Minutes,” the prologue to my latest novel-in-progress Spunkwater, based on late-night conversations with a former paramedic turned stand-up comedian, is in Pure Slush’s print debut, Slut, plus I’ve got some more bug love over at The Fiddleback with something called “Swatter,” a story that is precisely 79% true. And please don’t forget a personal favorite of mine, “Either Way It Ends With A Shovel,” based on both my own breakup and Flywheel’s former fiction editor’s diabolical Vegas wedding, a weekend that made The Hangover look like The Hangover II. That one is in Crime Factory #8 (check out their revamped website) and also contains a completely workable scam for stealing thousands of dollars from any Roulette wheel you choose. What else? Oh, yeah! I was ringside as mohawked madman Simon Jacobs practically made his new Safety Pin Review a household name, even getting the attention of a certain Sherman Alexie.

But let me spend some overdue extra time with the new Pulp Modern #2, the collection with the saucy Santa action below… 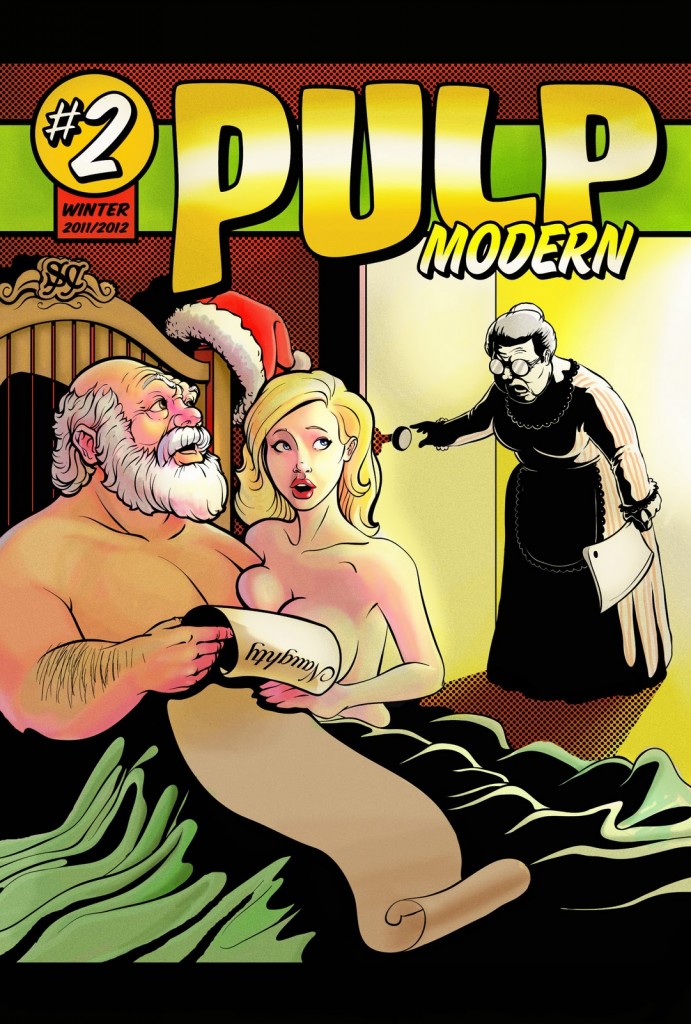 His list was so long it rolled right out the door.

There are more than a couple narratives you could infer by this cover, depending on who you decide is actually Mrs. Claus up there. This collection, another successful round-up by editor Alec Cizak, contains my second-longest title ever, “Three Ways Without Water (Or The Day Roadkill, Drunk Driving, And The Electric Chair Were Invented),” and this publication was mucho fun for me for a couple reasons. First off, rejections had been raining all purple all around this story for awhile now. In fact, it was fast becoming its own cautionary tale, as you can read here at Flywheel Magazine’s “Rejected Story Holds Press Conference.” But, luckily, it was able to finally kick the dirt off its boots and find a home. And for that I’m grateful. Loosely based on the Marty Robbins’ twangy masterpiece “Big Iron,” and condensed from one of the thirteen climaxes in my unproduced screenplay Pig Iron, I had just about given up on anyone taking a chance on this thing. So it felt real good to finally see my weird postmodern western on the page.

So I finally got the chance to crack the spine around the rest of Pulp Modern #2, and obvious stand-outs included M.C. Funk’s “Breed Out The Bad,” featuring the incredible vanishing Tarwater girls, a tale not unlike (my flawed memory of) June Spence’s “Missing Women,” but ten shades darker, hideous motivations revealed, a much more wicked conclusion, and jammed full of the trademark Funkensteinian confidence and style.  There’s also Stephen G. Eoannou’s “The Aerialist,” an alternate ending of sorts (maybe even a little wish fulfillment for monsters like myself) to the excellent daredevil documentary Man On Wire. I also enjoyed Steven Alexrod’s “The Auteur,” which reminded me of the seedy, Hollywood-bashing flicks from director Larry Cohen’s mid-’80s glory days. Mr. Cizak has also unearthed a classic by deceased British humorist Jerome K. Jerome called “The Haunted Hill Or The Ruined Home,” which kind of reminded me of H.P. Lovecraft narrating A Christmas Carol and suited the original Christmas release date rather nicely. JC Hemphill’s “The Void” was a fun, too, kind of an evil version of those ACME portable holes, sans Wile E. Coyote. John Kenyon’s “Gusano Gigante” rears its ugly head toward the end of the book, then takes a bow (put that title into Yahoo’s Babel Fish and it’ll spoil the ending if the Google images don’t freak you out first). Chris Le Tray, who penned the Indiana Jonesy favorite from the first Pulp Modern collection, returns here with “A Blunderbus For A Broken Heart,” a great little story where the gun is not only a main character, but also not really what she seems. Guns are chicks, right? Like cars? Anyway, if you didn’t pick this book up for Christmas, now’s your chance to right that wrong before someone smacks you open-handed across the face right in front of everybody. And this book is the perfect size to do just that.

More purple, you say? Okay, did I mention there’s a new Flywheel? I didn’t? Well, go read this thing right now. At the very least,  you will find out the climax to Court Merrigan’s epic Saga Of The Unrejected.

Upcoming readings, you say? Well, I’ll be taking a road trip to Chicago soon for two shadowy, disreputable, peripheral AWP events. First, I’ll be tossing back a couple with some of the Plots With Guns crew at the Galway Arms, nary a block away from where Dillinger was shot, then I’ll be representing/embarrassing Flywheel with co-host and convicted barn burner (“Acquitted!”) Jason Stuart, the author of Raise A Holler and Editor-In-Chief of Burnt Bridge. 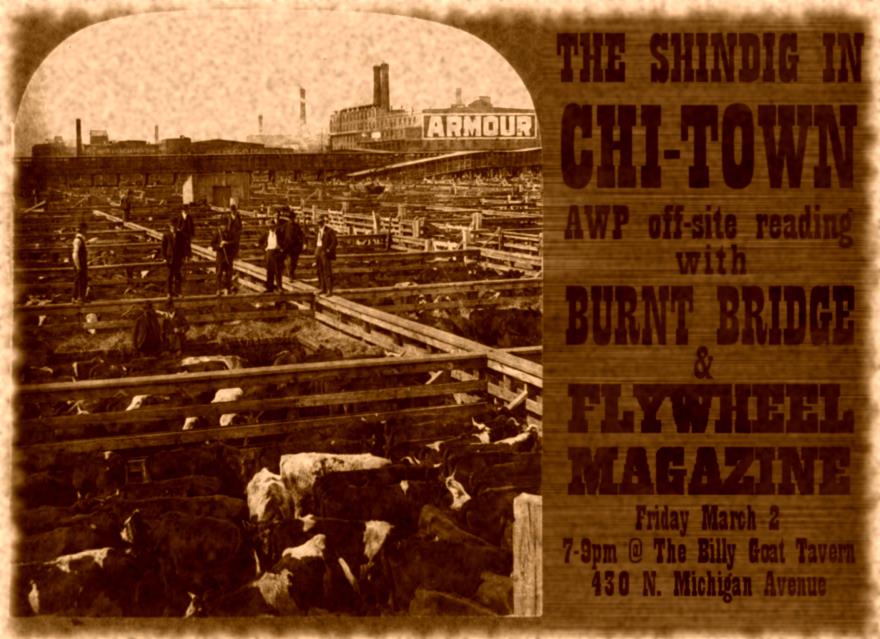 Damn so many purple links in this post. At least they’re purple on my screen. Purple rain in Spain falls mainly on some planes. Seriously though, any more purple and I’m gonna have to purify myself in the waters of Lake Minnetonka.

Upcoming stuff: I have a handful in the next couple months like “Shock Collar,” the invisible-dog-fence story I read at my MFA graduation last December. That one will be coming out in Indiana Crime, with a shout-out to James Dean’s grave, a passage I bungled badly during said reading. Looking forward to finally having the time to read more stuff very soon, hopefully up in Chicago when everyone else falls asleep like normal human beans but snores because of the broken noses in their mugshots. 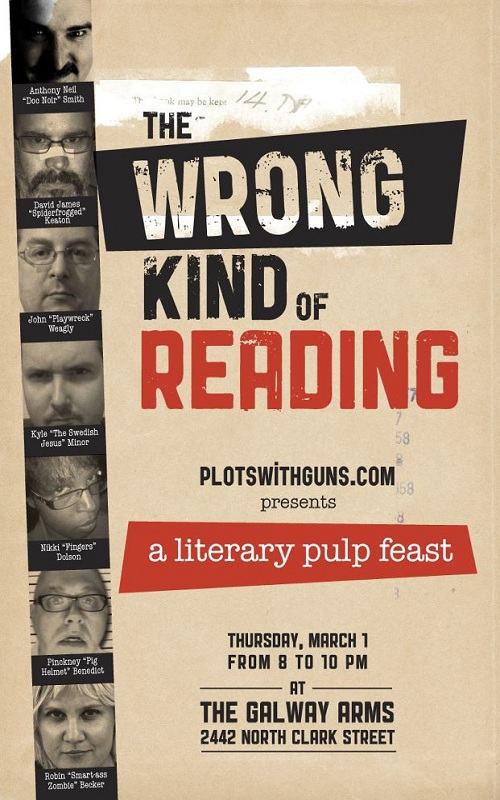 Also upcoming, I got a love/not-quite-crime story in the special Valentine issue of Yellow Mama, then my first mini-play, a Shakespeare satire titled “Friction Ridge,” (last seen being acted out by professionals in my Shakespeare Adaptations class at Pitt to theme music from Jurassic Park and Public Enemy’s “Fuck Tha Police”) will be in Beat to a Pulp any day now, a publication I’ve been chasing for a couple years at least. And finally, two stories, “We’re Made Of Meat” and “Last Last Meal” will both be in the upcoming Pure Slush novel-in-stories Gorge, which I’m particularly excited about because it’s all based around the shenanigans of the opening day of an imaginary restaurant and I’m always hungry and because I got carried away and wrote two stories for it instead of one. I got to play the chef. Click my last swollen, purple link up there to check out some of the real-life inspiration for the book.

In other news, and speaking of the ice box, my fridge magnet poetry should be required by law.