(update 5/1/12: I actually won this thing! Hurry up and start the car before they come to their senses! Here’s the final list of winners where they keep calling me “Jones.” Original post below)

Over at Spinetingler Magazine, I was recently nominated for Best Short Story On The Web for my story “Either Way It Ends With A Shovel.” It was published in Crime Factory #8, the issue with the disturbing Wheel Of Misfortune on the cover: 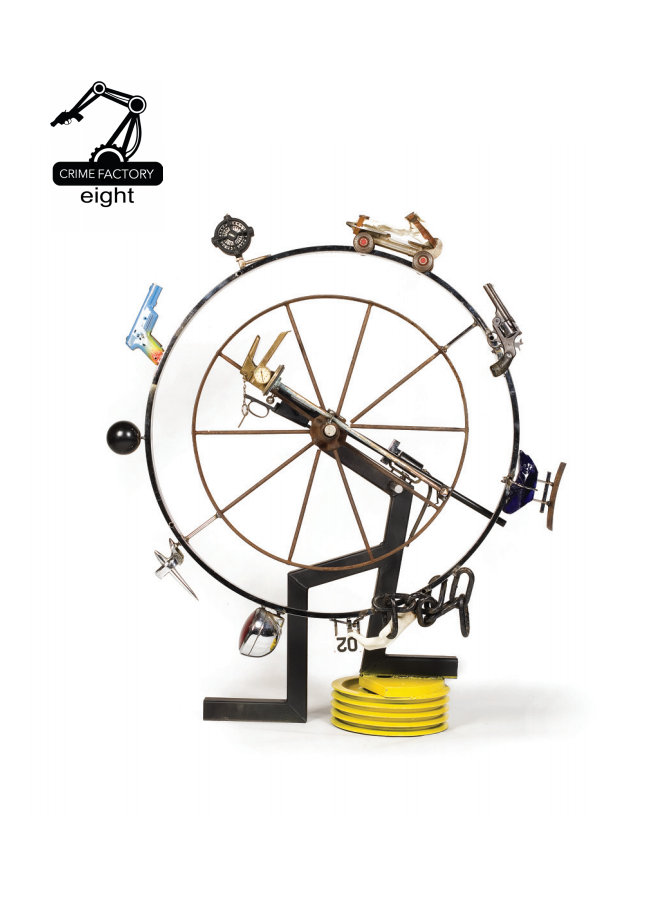 Is this what powered the creepy steamboat in Willy Wonka?

I’m very honored to be in the running with those monsters, and this nomination is extra exciting for a couple reasons. First of all, the title is based on a irate email a co-worker once sent me concerning our employer. The title was the subject line, and neither of us work there anymore. So that’s fun. Second, this story features a T-shirt with a flashing equalizer on the front of it! The true story of the T-Qualizer goes like this: I was attending a wedding in Vegas for a friend of mine, and I had this fond childhood memory of relatives buying me toys at weddings all my life so I’d stop crying, and this inspired me, in return, to buy silly stuff for the groomsmen. Like one guy got a Spider-Man pinkie ring watch thing (which the punk lost the same night) and I got the best man a T-Qualizer. He received the glowing American flag version below because he looks just like the kid from Varsity Blues…

…so I figured anyone wearing this around a casino would provoke someone into at least one drunken argument, right? But instead the crowds just loved it. The crowds by the gaming tables anyway. Until we slunk into some “world famous” (?) burlesque show around the corner. We had real good seats because we were living in the casino at this point, so when the show started and they turned down the lights and this pulsing dance beat started, we were right up front. Now, to be sure that everyone would get the full effect of the dancers when the curtain went up, the casino wanted it to be pitch black in there. Blackest black. None more black. Vin Diesel would be unable to kill someone with a teacup it was so dark in there. And it was.

On the front of the best man’s shirt, the flag was pulsing with the music bright as hell and lighting up about half the room. There was sign warning the audience about immediately ejecting anyone who didn’t turn off their cellphones, so our wedding party expected to get the boot at any moment. And sure enough, a security guard with a red laser light to lead her way shows up and implores the Best Man to please please turn off his shirt. “Right. Now.” But instead of turning it off, (and this is probably why he gets to be the Best Man) he claims it’s “connected to him” and there’s “just no way to shut it off.” He pretends to struggle with the flag on his chest, pleading, “I can’t! I have no buttons!” And this confuses everybody, and there’s that moment when you can feel a crowd getting angry around you all at once. But then she reaches under his shirt and yanks his wires, plunging us mercifully back into darkness and saving us from the mob. Amazed at the balls on the Best Man, we buy him a bunch of beer after the show, flag happily pulsing away.

So, long story short, I wanted to get a T-Qualizer in a story somehow, around much higher stakes than just a weekend of assholes getting drunk and never getting the beatings they deserved, even if the shirt just made a cameo. So, hopefully, my story in Crime Factory answers the question, “What would Jesus do…if he was wearing this particular shirt and got Tasered.” (Also, the story teaches you how to rob a roulette table with bubble-gum machine toys! You’re all like, “Tell me something I don’t know.”)

But go read all the stories. I’ve read all but two as of now, and the competition is scary. Matt Funk wrote nineteen more stories on his way to get the mail today, and they’re better than most of what’s on the street, and Court Merrigan has one of those last names that just invokes happiness. How can I compete with that? Stephen Graham Jones has three names, which cancels mine out, and he just published a story about zombies fighting robots because just a zombie problem wasn’t enough for him. Hilary Davidson probably has so many of these awards, she’s got a trophy case topped off with a stuffed leopard by now. Nigel Bird is crawling all over these award categories like a coconut crab (Google it then scream) with nominations such as Best Cover, not to mention his Pulp Ink Zine everywhere, too, so that guy’s clearly got skills. His story is over at All Due Respect, two more stories are over at Beat To A Pulp, two more at Plots With Guns, one at Shotgun Honey, one with some great artwork over at Tehelka, one at Pank, one at Flash Fiction Offensive…see what I’m saying? What I’m saying is I’m probably doomed.

Go here to read the rest of the stories.

Just kidding! I kid! I kid! I would never use shady political tactics to suppress voting.

Go here to read those stories! They’re all quite amazing. Funk & Merrigan! (sounds like the best encyclopedia set ever), writing machine Jones! Peter Ferris sticking it to Walt Disney! And a bunch more.

Go here to buy a T-Qualizer (do not do this).

But read everything.  There are 11 more categories besides Best Story, and a ton of new stuff to discover, like Jason Stuart’s Raise A Holler in Best Novel – New Voice.

It’s a huge list. Too many to list here without neglecting more work. And they all tap and tingle spines.