next next big thing

spiders are our friends > SPIDERBLOG > Uncategorized > next next big thing

So there’s a round robin of bloggin’ going around where a writer tags you to answer 10 questions about your “Next Big Thing.” And I got double-tag-teamed by Chad Eagleton (0ver at Cathode Angel) and Richard Thomas (over at What Doesn’t Kill Him Makes Him Stranger), so here we go…

1.) What is the working title of your next book? 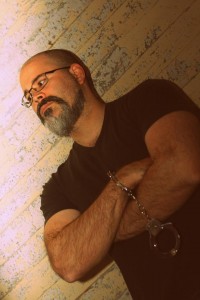 In grad school at the University of Pittsburgh, I began writing grungier and grimier fiction in workshops to push back against what I perceived as a prevalent MFA-style of quiet epiphanies (I realize now this style wasn’t as rampant as my young workshop brain initially thought, my reading skills had to grow with my writing), and when I looked at the stories created in that time period from a distance, I realized a pattern of gleeful authority bashing had emerged. Not just cop bashing, but some weird God Complex paramedic bashing, too, which must come from the subconscious because I have nothing bad to really say about them. But they make a wicked Greek chorus when you need them to.

3.) What genre does your book fall under?

These stories are all over the place. Psychological horror, crime, western, humorous, experimental, creature horror, Choose Your Own Adventure, literary, slipstream, magical unrealism, “transgressive,” whatever that means, satire. There’s a good smattering of dark humor in most of them though, which I think of as the glue. Or silly string.

4.) What is a one-sentence synopsis of your book?

5.) What actors would you chose to play the parts of your characters?

Hmm, of the recurring characters throughout these stories… 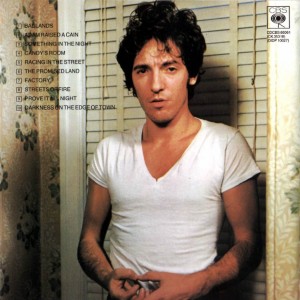 “Jack” would be played by Stephen Dorff. Or Brad Douriff. Either one. “Rick” would be played by the scrawnier and more powerful Bruce Springsteen off the back of Darkness On The Edge Of Town. But wait! At the last second, I would switch those roles. See, that’s what they did with Bill Murray and Robert DeNiro in Mad Dog and Glory, and what they did with Keitel and DeNiro in Mean Streets. And this is how I will get the most out of my actors. And hopefully we could get the entire cast of Deadliest Catch to play their doppelgängers in the imaginary reality show Crabmasters (as depicted in my story “Greenhorns”). Who else? The character of “Gumby” in my prison story “Schrödinger’s Rat” would be played by 12 Monkeys Brad Pitt, not Babel Brad Pitt. The villainous “Officer Bigbeep” would be played by, I don’t know, Ray Liotta? The part of “Heck,” the fireman who burns for our enjoyment in “Hell,” will be played by that idiot I once saw getting a tattoo of a dragon attacking the World Trade Center a month after 9/11. He was also taking the “firefighter test” the next day, or so he said. Whoosh! Who else? All the dogs in “Do The Münster Mash” will be played by the annoying dogs that live next door to me now. Hopefully, they will suffer the same fate. “The Man In Blue” will be played by Johnny Cash’s disapproving dad. The part of the “Bait Car” would be played by my 1993 Chevy Cavalier, which was also ridiculously easy to break into. “Female Cop With Hair Spilling Dramatically Out Of Her Helmet” would be played by my Junior High School crush. 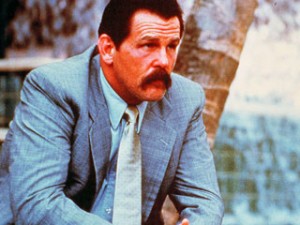 6.) Will your book be self-published or represented by an agency?

Weird question considering the logical third alternative, which is, uh, neither? I’m still seeking representation for my three novels, but my lack of an agent doesn’t stop this particular book from being published by up-and-coming New York publisher Comet Press. Release date is May 1st, 2013.

7.) How long did it take you to write the first draft?

These stories were collected over a period of about three years. The title story “Nine Cops Killed For A Goldfish Cracker” was actually originally called “Fish Bites Cop!” in early drafts (it’s a goofy headline, get it?), and ever since I switched titles on that story back in 2009 when it was picked up for The Death Panel, an excellent “dark crime” collection 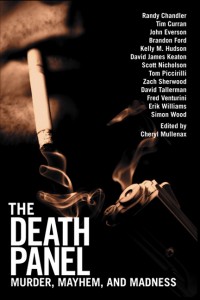 (my first big sale, and I was lucky to be included with talent like Tom Piccirilli, Fred Venturini, Randy Chandler, David Tallerman, and Simon Wood), I’d always thought it would be a good name for a book if I ever put together a themed collection.

8.) What other books would you compare your collection to within your genre?

I was going to say “Spoon River with more cop killing” to be a smart ass, but there’s a shit ton of death in Spoon River, beautiful as it is. Honestly though, I don’t know if I’ve read a collection where characters bounced around stories, resurrected, reset, or carried the baggage of previous stories, depending on how they’re needed. Maybe King/Bachman sort of did this with his characters in his Desperation/Regulators experiment, but not really? I don’t know. It straddles several genres, hopefully successfully. The position of these tales in the table of contents took, no joke, weeks to organize, as I believe there is a cumulative effect when read in a certain order. Not just exhaustion, but maybe also an understanding of a philosophy that started with a disregard for authority, but ended with a kind of manic celebration of abandon. It also feels very ’80s to me. All the King and Koontz and McCammon and Ellison and Ballard and Shane Stevens and Thomas Harris and Clive Barker I devoured back then kind of boiled back up.

9.) Who or what inspired you to write this book?

I come from a long line of contrarians. And growing up, nothing made my family happier than sitting around a table talking about the extra officers necessary to apprehend an uncle. Also, I grew stressed from almost getting my novel published every six months or so, almost getting an agent every three months or so, therefore I assembled this book to keep my sanity. My most recent novel The Last Projector is in reading limbo again as we speak (as I speak with myself, I mean). See, I can get an agent to ask for a hundred more pages but not quite pull the trigger (hundred and fifty pages is my record, requested in lumps of 25). Also, I often make the mistake of searching for “bad cops” on YouTube and feel my blood pressure skyrocket when I watch those clowns shoot loose dogs or kick pregnant women in the heads. So I do horrible things to them on the page and use their real names and dare them to do anything about it (as long as they’re in jail or dead or far away back in Pittsburgh, of course).

10.) What else about the book might pique the reader’s interest?

The book cover was designed by the talented Mark Dancey, co-creator of Detroit’s infamous Motorbooty magazine (clear inspiration for Beastie Boys’ Grand Royal magazine if you’ve ever read them both) and the artist behind iconic album covers like Soundgarden’s Badmotorfinger (arguably their best). He’s done work for Tenacious D and Tricky, too, and I’ve had framed Big Chief albums sporting his cover art on my walls for a decade, ask anybody. 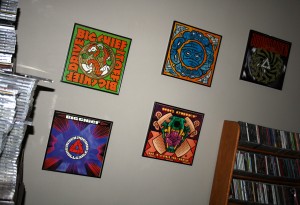 I have been a huge fan of his work since the ’90s, so when we needed a cover, I reached out to see if he liked the project, and I couldn’t believe it when he signed on. In total badass fashion, he said he had an authentic Ann Arbor police cap in his studio he could use for a model (or did he say “skull”?). But, yeah, we were very lucky to land him. The cover is in its final stages right now, but here’s Mr. Dancey’s rough sketch to get an idea where it’s going.

And here’s my childlike rendition that Mr. Dancey likely got a chuckle out of. I like to doodle it on things…

Also, the introduction to my book is being written by Jed Ayres of Noir at the Bar and Fuckload of Scotch Tape fame. Jed is an incredible writer, all-around great guy, approximately nine-feet tall, and he seemed like the only writer I’d met recently who was also an unabashed child of VHS like myself, an orphaned child of the ’80s video heyday, and someone who, through his own inability to be shocked (just read any of his work or attend a salty event he M.C.’s), would look deep enough into this book, past the pileup, to get some of the artsy shit I was going for. From Jed’s killer intro:

“He revels in the extremes of bad ideas. He cajoles and fondles them. He teases each for its full potential. His voice is nearly audible between the lines of the text pushing himself and the reader ahead – let’s take it just one step further – no, fuck that – if you can’t hang with me to the end of the line, I win. Keaton’s characters are blessed/cursed with preternatural abilities to avoid the brunt of natural consequence until it’s matured into something damn near apocalyptic. He’s daring you to finish…”

So, yeah, that’s my book. First whole book I’ll be able to slap my name on. It’s a good slapping size, too. I hope you’ll read it.

Okay, to keep the ball rolling through the cobwebs after Dr. Jones, I’ll goose five more people and see what they’ve got on the horizon. They probably already did this because I’m slow and I don’t fully understand the process of this chain letter. How about: Jason Stuart, Randy Chandler, Matt Potter, Heath Lowrence, and Matt McBride. Speaking of McBride, please read “The Tar Hole” from Noir at the Bar II immediately. One of the top five stories I’ve read this year. Okay, so I only read ten, but I don’t take unnecessary risks.