A big project I was involved with sees the light today. GORGE: A Novel In Stories, published by Pure Slush is now available to order. It’s not just a pile of stories, not just a novel, but it was a massive undertaking. A year in the making. 54 stories, 33 authors. Over 300 pages. About a hundred and fifty email exchanges. I have three stories within:

A ton of talented writers share the pages with me, too. Sally Reno, Gill Hoffs, and mastermind Matt Potter, all who’ve I’ve enjoyed reading in previous Pure Slush projects. Sally Reno’s “Blueberry Hill” opens the novel beautifully, painting a perfect picture of this joint, the saucy but fictional Café Gano in Machiasport, Maine (they hold out hope that Stephen King comes to visit one day). I’m glad she busted the bottle over the bough. I would have never been brave enough to go first. 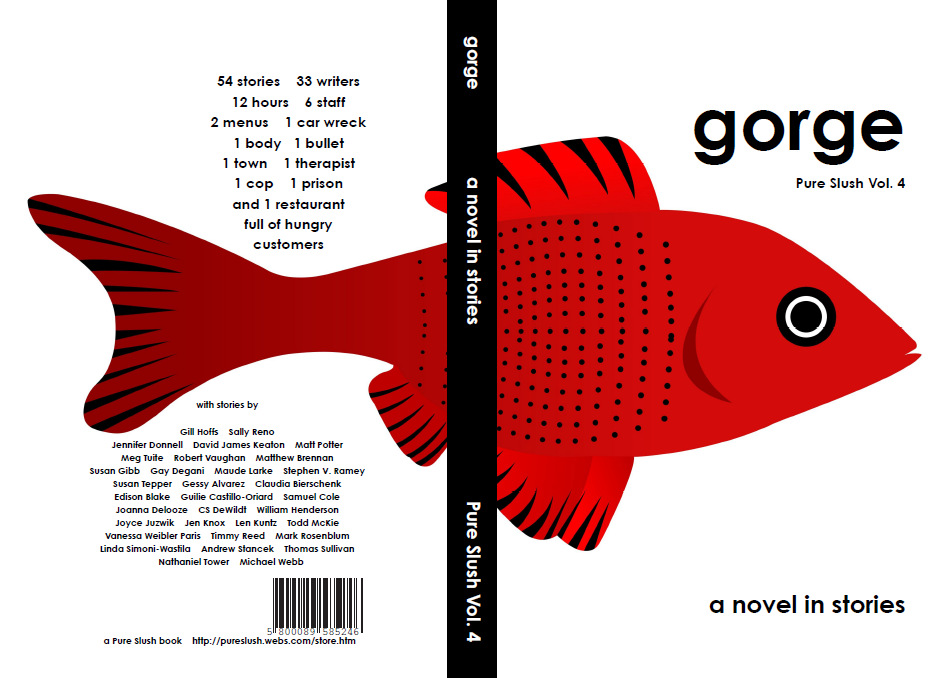 I’m serious about this taking a year. At least a year. You ever see The Doors movie and hear them complaining about how hard it was to get together and record L.A. Woman? Imagine thirty more Morrisons. Worse, imagine thirty more Manzaraks! But it was way more fun than that. To start off, I was given the chef character to flesh out. Vinnie “Bruce” Lui. I got into Bruce’s head. I also learned a couple recipes, which I would never dare to actually try cooking. This character felt like some responsibility. I mean, all 300 plus pages of this novel take place in one day, and people gotta eat!

I also learned about the Last Meal program on Death Row during my research, since the imaginary Café Gano is dangerously close to a prison. But most of my stories were based on memories I had washing dishes at a fancy restaurant called Chris Berman’s Supper Club back when I was a whelp (I also got my ass kicked in that parking lot, but let’s not dwell on that, I grabbed a lotta free lobster). But at Berman’s, one of our dishwasher tasks was to take a giant bucket of hot grease to the smoldering grease trap in the parking lot, a seemingly simple adventure, until… I’ll just let you read it.

Check out all this legwork. Here are the character profiles and photos we used to get our brains jumpstarted. And Mr. Potter also sent us maps! So we could visualize our contributions, which proved crucial as you were doing basically an Exquisite Corpse game with dozens of people. More like Exquisite Lunch. Lots of “Naked,” too, actually.

And we were given a menu! That’s a lot of pressure on a chef who faints at the sight of blood. Bruce was fragile. But there was more going on in his over-worked brain than the staff realized. Here are some tasty quotes from GORGE to get an idea. I also learned the differences between American phrases and names. Did you know they don’t call it “cooking school” over there across the pond?

So, yeah, check it out. It’s full of food, so that’s perfect for Christmas, right? And editor Matt Potter (a very hands-on kind of guy, did I mention my 150 emails?) is partial to cramming some sex in this thing, which is a nice change from the crime writing I’ve been doing. It was definitely a lighter project to work on, although I couldn’t resist introducing a lonely bullet where a pearl would have sufficed. This is the most fun I’ve had working on something in awhile.

p.s. Bonus! Working on this novel with 33 other people had unique challenges. One thing I quickly realized was…you can’t move too quickly. We had access to each others stories as we read them, but sometimes I got carried away anyway and would write something, only to find out, the logistics of it would be impossible because of actions other authors were giving the same characters. A good example was at the end of “Half Staff at the Grease Box” previously called “Gingerbread Stakeout,” which was chef Bruce doing a bit of stalking, until Matt realized that the woman he was stalking…wasn’t going to be home. So maybe minor spoiler in this deleted scene below (which I liked a lot), but it had to be chopped because we were all in this boat together. So, read on if you like, this alternate timeline where Bruce revisits his old vehicle and some old memories. My final story in GORGE has a better ending, and it’s a better fit, but I’m still interested in where Bruce may have gone in this alternate universe…

“I’m parked outside of Mya’s house in my little hornet, hiding behind some pine trees like I used to. It’s midnight. The mirror on the passenger side is angling straight down, making it impossible to see anything but the road. Did someone tilt it on purpose? I can’t believe I’d forgotten about my truck. I try to angle the mirror back up, and it slumps back down again, the mechanism inside loose and weak. It reminds me of an eye rolling back in the socket if you peek inside someone’s head as they sleep. I walk around to the back of the truck and see a brown edge of rust eating into the flanks. I tap it with my toe, and the rust crumbles like burnt toast. I’m terrified by this, that if I kick the tire it will cover my foot like taffy. I fight the urge to rub the metal ash off with my knuckles and jump back inside to open the glove box. Still empty. I reach under the passenger seat and feel some gum in the carpet, probably from someone spitting out a half-open window and the wind bringing it right back inside. You see that happening a lot in the movies with cigarettes, but never with gum. I decide that if gum started a fire, people would take it more seriously. I wonder how much spit never makes it outside and people don’t know it. If spit started a fire, we probably wouldn’t risk that either. Yes, if we breathed fire, we wouldn’t be unknowingly driving around with our feet resting in a dried swamp of saliva. Needing some air, I roll down the windows and crack open the door so that the dome light stays on. There’s a dozen mosquitoes rebounding off my glowing red hand before I count to a hundred. As I wait for her to get home and play with the prize I found in my oyster, I think back to when I first started working with Mya, how I tried to teach her to drive stick shift, how she seemed to kiss me under the lights that gathered the most insects. How her sweaty fingers and high heels kept slipping and stalling my truck more than I ever did, how, impossibly, she was actually ashamed for once. It was the most vulnerable I’d ever seen her, learning how to drive stick, and that was enough. She told me to park out of sight every time, and I did. We circled the parking lot that day I taught her, never getting out of second gear, and I imagined the trail of grease and maggots from that upended bucket, a runway that might hold its heat forever, slowing rising from the blacktop behind us to mark every lurch and halt.”