Okay, okay, I’ll review another one! Can’t get an hour of sleep without the world (nobody) demanding more Lynx reviews. Boy, do you guys love outdated game systems. Who knew! So, looking through my stash, I thought I’d dissect another popular arcade conversion that tried tackling a unique control system and a baffling story line. Anyone remember Robotron: 2084? 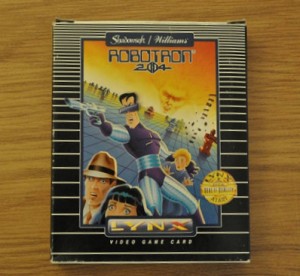 “Stand behind me, Mikey! Your mom and dad are gonna be A-okay… oops.” (in case you’re wondering, this is exactly what the game play looks like)

It was eye-catching and ear-catching back in the salad days of arcades. It had those intense, “futuristic” sound effects (remember how Defender sounded so cool the first time you walked by), all those synthy sounds that kind of reminded me of this song by The Fixx actually. And all sorts of pulsing colors, too (the memorable level-change animation with that trippy 2001-ish “stargate sequence” effect is also intact in the Lynx conversion). But for the longest time, I always got it confused with Gorf, a game that pleaded with passers-by to “play with Gorf…play with Gorf” in this creepy, desperate electronic voice. Or I got it confused with Berzerk (“Coins detected in pocket!”). Or all three confused with each other. But of course Robotron never talked at all, so my confusion makes little sense. They looked kind of the same maybe? Hell if I know. Trivia note: a better reason to pretend every game is as cool as Berzerk might be how it secured its place in history by, um, actually killing people (check out number one on this list).

But what really got the crowds wasting quarters on this game was the control system. Robotron had two, count ’em, two joysticks. Say what?! Welcome to Crazy Town. One controlled your robot dude. The other one controlled his inexhaustible gun, which I guess was just his arm, like Megaman or something, only he was too tiny to be sure (but there’s no way such a ridiculous weapon looked the way it’s depicted on that box up there). Also, like the rest of Williams Electronics’ oeuvre, this game was borderline impossible, tailor-made for arcade quarter munching (the Lynx is only tailor-made for battery munching). Of course, this enticing control system was the perfect carnival barker for the swindle, making victory seem almost within your grasp.

Where’s the clutch on this thing?

Why two joysticks? Interesting story really. The designer, Eugene Jarvis, claimed his double-joystick control brainstorm came to him in rehab after an automobile accident injured his right hand, making it impossible to use the usual joystick/button combination (and, I assume, a manual transmission). Instead, he imagined a protagonist named, er, “Eugene,” who fired his weapon nonstop, sort of like a heavily-armed drunk (or a Pittsburgh police officer), who you could maneuver with one joystick while aiming his constant barrage of deadly bullets with the other. This did give you a fighting chance for a few early screens, which like I said earlier, were still hard as shit.

Lucky for Lynx owners, Robotron’s challenging difficulty level is fully intact in this conversion. But what about that unique and utterly essential control system? Nope!

Your little Eugene still fires nonstop like Jesse “The (Dead) Body” Ventura and his trusty Gatling gun “Painless” from Predator, but instead of that second joystick (or control pad), you’re forced to rotate your gunfire around your body clockwise or counterclockwise by hitting A or B. This means shooting someone above you now requires three taps of the button to aim down, left, then finally up. This means you’re sort of shooting your weapon like a lazy firefighter struggling to aim his hose and spraying everyone and everything on the way. This means you won’t make it very far. But the game is replayable as hell. And that’s what ultimately saves it, even if it didn’t save Jesse… 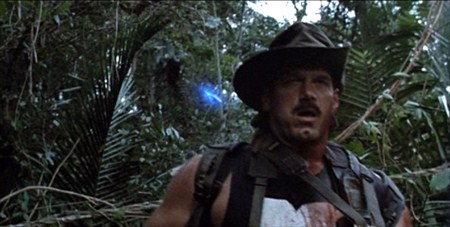 “I ain’t got time to breathe.”

But how about this crazy, futuristic story line? According to the cycling, between-quarters plot screens (transferred intact and word-for-word from the arcade version), you are some sort of experiment gone wrong, trying to save the “last human family,” consisting of a “Mommy,” “Daddy,” and, uh, “Mikey.” But unlike Mikey from Life cereal fame, he’ll eat anything…except a robot’s foot! You see, if you don’t save these helpless human specimens, they are unceremoniously stomped to death by lumbering green automatons. It’s sort of horrible really. The green robots seek them out and…splat. They walk right over them, leaving nothing but a skull and crossbones and a tiny electronic scream in their wake. Yeesh. I’m going to assume that the skull and crossbones is there to mask what really happens to Mikey and his parents, and the makers of the game are just censoring the carnage. That’s gotta be right because I’m pretty sure being curb-stomped with metal feet doesn’t transform you into a pristine skull and crossbones every time. Unless those green robots are actually eating Mikey and the Last Human Family (-Sized Meal). 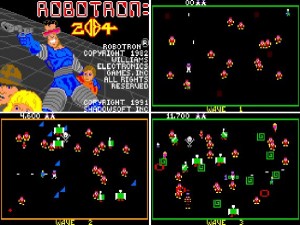 Each progressive screen is like a time-lapse video of multiplying bacteria.

But, yeah, did I mention this game is hard? You aren’t going to save them for long, no matter how many joysticks they give you. Things escalate quickly. Things become difficult to follow. Things are screaming, squawking, thumping in every direction. Basically, the screen just fills up with more and more piles of digital bullshit.

“Due to a genetic engineering error, you possess superhuman powers.” Wait a minute. Who made who? Who made you? (♪ “The video game she play me…” ♪) Surely not the Last Human Family. Since they’re constantly running away from you in fear, it can’t be them. Even more incriminating, the Last Human Family sometimes has like ten Mikeys on the screen. What is this, Screamers? So if the Last Human Family is something we’ll never understand, this means you must have been created by your Robotron overlords…in what has to be the most colossal fuck-up of all time. Picture how that scene must have gone down:

“Hey, Blarg, got a sec? We were experimenting on the Second To Last Human Family over here in the lab, and in the middle of all the blood and screaming, uh, well, we seem to have give one of them a lethal gun hand with unlimited ammunition.”

Grunts: “Red Lectroids from Planet 10!” I always think these are the “Electroids” mentioned in this game’s introduction because I’ve seen Buckaroo Banzai way too many times. No, these are just red-suited clockwork fools called “Grunts.” Sorry, I mean “Ground Roving Unit Network Terminators.” Easy to zap. Don’t deserve the name.

Hulks: These Robotrons are green, blocky, indestructible, and enjoy stepping on the Last Human Family’s heads like this is appropriate in a game readily available to children.

Spheroids: Just a red circle. It zips around creating “Enforcers,” little triangles that shoot odd little plus signs at you, like a constant assault of bad news from the pregnancy test you just peed on. And the Spheroids seem to have a limited amount of Enforcers they can birth. But Enforcers are pretty dangerous, too, as they’re the first enemies you’ll encounter that fire back at you.

Quarks: Just a purple square. It zips around creating “Tanks,” little rolling robots that shoot bouncy balls at you. The screen that introduces the Quarks and Tanks is by far the hardest screen to clear, especially when it’s full of those lethal bouncing Quark-spawned Tank balls. What did I even just say?

Electroids: Any swirl or triangle or square littering the game area. You die if you touch them, but they make no move to attack you.

Brains: Aaaaaaah! These are terrifying. My money is on the Brain Robotrons as the culprits who created you. They’re these blue-and-purple guys who look a lot like the Martians in Mars Attacks! Their mission is to grab Mom, Dad, or Mikey and transform them into “Progs.” Aaaaaaah!!! I’m not sure what the Brains do to them exactly, but it must be horrible. Once they touch your precious family, they turn the humans into glowing, murderous versions of the Xanadu cast, leaving beautiful light trails behind them as they streak around after you. Probably on roller skates. You know you’re in trouble when you hit this level and the Brains teleport in at the beginning, buzzing all slow and cocky. One more thing, in the opening scrawl, it says “Beware of the Brain Robotrons that possess the power to reprogram humans into sinister Progs.” Hold up…

I rest my case.

Run! Ignore the last family. Real people can’t be “reprogrammed.” No way they’re not in on it.

p.s. A note about my ongoing Lynx World Records and Twin Galaxies’ “International Scoreboard.” I do have the world record in this game, just like the rest of the games I’ve reviewed. My proof is a little sketchier this time around, but according to a tiny notebook which I just discovered (having apparently kept it since 1993 when I cut it in half to store in a Lynx box!), I reached the seemingly ridiculous Level 39 and accumulated 698,875 points. This score beats some guy named Ron by a healthy 274,425 points.

(update: things are even worse now than what comes after this paragraph. Now you have to register to even view the scores, so that purple link above goes nowhere. Ron, don’t hide behind red tape and my lack of registration patience/skills!)

(second update: things have gotten worse yet, as the link now goes to a GoDaddy domain up for grabs. See that, Twin Galaxies, your extortion plan was a terrible business model! Where are the Brains when you need ’em?)

So it turns out you won’t ever see my name on that International Scoreboard anyway because, yes, it’s true, they wanted you to pay (!!!) for such a privilege. Yes, you heard that right. You had to pay them 20 bucks or something equally silly to submit your record-setting scores to Twin Galaxies. Because that’s your reward for being the best, kids. So it looks like they’re going to have to settle for me submitting my record-setting balls in their breakfast because, yeah, I’ll just keep track of everything in my head or on adorable half notebooks, thanks, scammers. 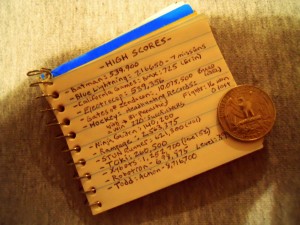 Future Dave looks back at his precious half diary! Such high scores! Watch battery included for scale.