spiders are our friends > SPIDERBLOG > Uncategorized > born to ruin

So I’m riding on this Bruce Springsteen anthology (downbound) train and wanted to type up some words about my own Broooooooooooooooose! superfandom and get some shouts out to all the people who gathered us together for Trouble in the Heartland, a collection of crime fiction inspired by Springsteen songs. This thing turned out to be bigger than I originally thought, as they ended up recruiting writers as huge as the Mystic Pizza guy. Seriously, though, Dennis Lehane’s in here, the man behind instant classics Gone Baby Gone, Shutter Island, and Mystic River (how many of us reenact Sean Penn’s “Is that my daughter in there???” scene on a weekly basis, right? Oh, just me). Here’s a link to Joe Clifford’s blog where he talks more about the project, an inspired and unholy merger between Gutter Books and Zelmer Pulp. The book also does some good in the world, too, as part of the profits go to the Bob Woodruff Foundation, which helps wounded veterans and their families. Now check out the cover. Rusty cars all gritty ‘n’ shit: 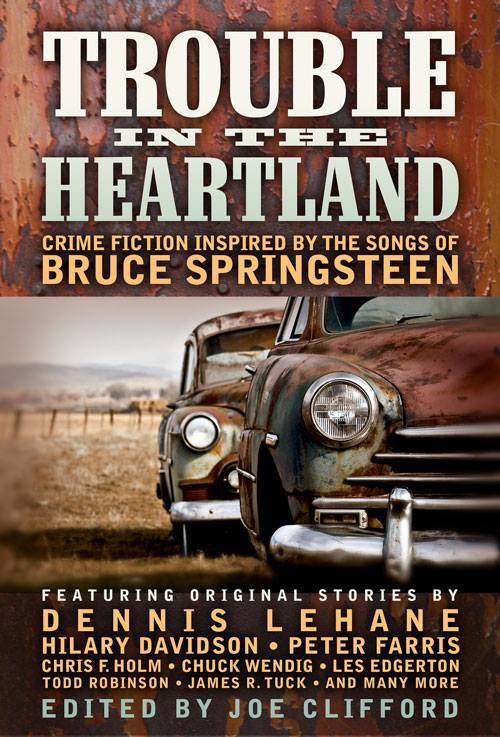 This car chase has been going on for decades.

That great album-like artwork is by Chuck Regan. I’m pretty sure Joe Clifford was just trying to be nice, but I was told my name can’t be on book covers because it’s too damn long. I choose to believe this story. Not that it’s any slouch to be a “Many More” up in here. There have been many, many noble Many Mores throughout history. But the name thing is not my fault. I know I’ve said this before, but it’s that other David Keaton, exonerated from Death Row (whose life story would make a great Springsteen song actually), who did this to me because he will always get more Google hits if I don’t slap the “James” in there.  They even made a movie about that guy starring Danny Glover. I don’t think I’ll ever be able to claim that distinction either. But the “James” does make for fun confusion with James David Osborne. Seriously though, very grateful to be on this album with a band like this. Thanks, Joe!

But, yeah, to justify our inclusion in such an ambitious project, everybody’s doing a little blog tour to get the word out. I for one would feel bad if I didn’t do some kind of promotion for a publication that refuses to pay for this grill (I’m talking all three possible kinds of “grills” here). Also, before they had settled on the name “Trouble in the Heartland,” I want credit for trying to talk them into the title… Born To Ruin. Get it? “Ruin!” And the title could have the “I” be a different color so it would still look like “Born to Run,” you see? But I guess there’s no “I” in team because that idea didn’t float. I kid! Of course, now that they revealed the cover, I see the error of my ways. And at the very least, I can give those rusty pickup trucks the googly-eye treatment, Pixar that sucker up a bit. Haven’t you heard? Those eyes improve everything. 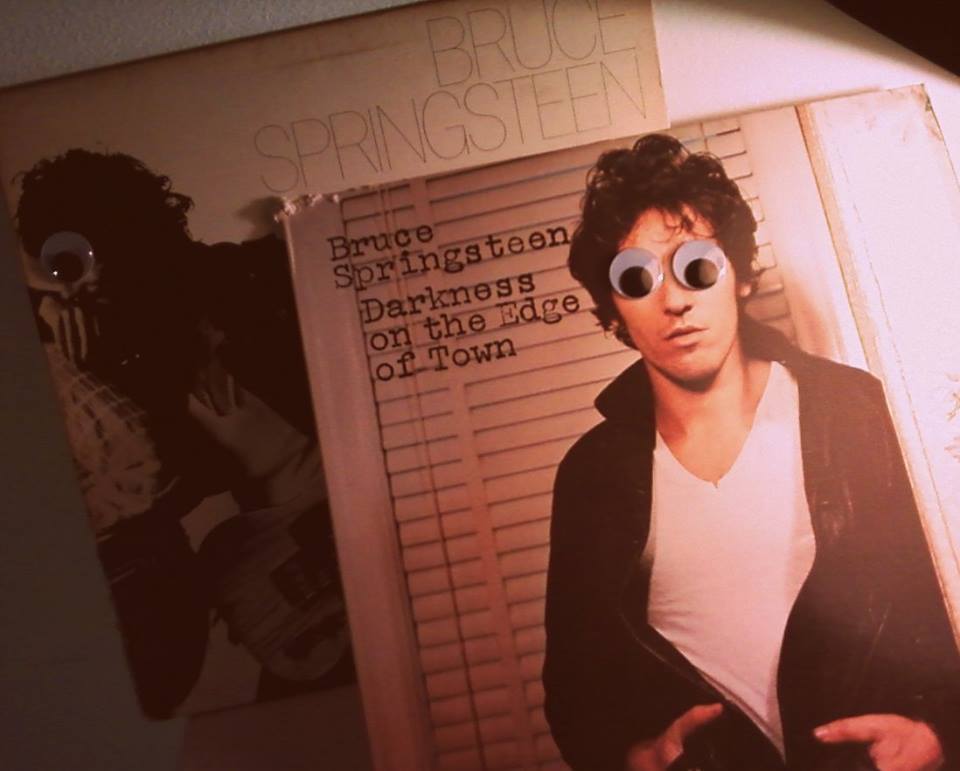 So I’ll talk a little about the story I wrote for this. I picked “The Ghost of Tom Joad” and came up with something called “The Ghost of Jim Toad.” I did this for a couple reasons. You’ll have to read the story to find out who Jim Toad is, but one of the reasons for this particular selection was (and I hate to say it) because it’s one of the only Springsteen albums with decent artwork. 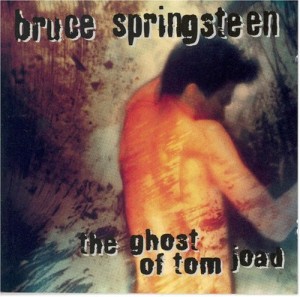 Maybe if you pan back though, this guy is building a giant Bruce Springsteen head.

Bruce has the same problem as my other absolute favorite musicians, Nick Cave and Warren Zevon. They all suffer from Giant Album Head Affliction (okay, except for Murder Ballads). I’ve complained about this for years. Most of the time with their albums, you just get a picture of their giant head on the front, which I guess means they’re so popular that they don’t need album art at all. But Tom Joad was one of the exceptions. And Nebraska of course, which also contained murder ballads! Murder ballads for everybody!

Now that I think of it, as good as Springsteen’s album cover is, Rage Against the Machine one-upped them with their cover version cover cover. But what can you do. Other reasons for picking this song – it has “Ghost” in the title, so I figured a story would pretty much write itself. Which it did, but no real ghosts showed up in it to make things easier. I guess that’s not what “ghost writing” means. There was some ghost barking though. I’ll explain. A few months ago, my neighbor got drunk and broke into his own house after he locked himself out. I got confused and called the cops when I heard the glass shatter, and when the cops showed up to grill him and gently bump his chest, the dumb fucks left his door open and his little dog got loose. So I felt real guilty and crept out to help him look for it, denying the entire time I was the one who called the fuzz.

So this story is my confession, because the fool moved away, so he can’t get mad about it now! It’s also a “What If?” As in “What if things got worse and worse that night?” Because things got weird but they coulda got bad. So my story tries to give you both. Also, it’s one of Bruce’s “important stuff” songs (I mean, we’re talking Grapes of Wrath references here), which I normally don’t gravitate towards. I prefer his story songs and murder ballads (!) and dead-ender fables, like all of Nebraska. But I keep coming back to this tune and its mournful harmonica. And isn’t there a theory that Springsteen, much like the Star Trek films, alternates big studio albums for insular labors of love? So if the album Ghost of Tom Joad falls between The Rising and the poppy Doublemint twins Lucky Town & Human Touch, it fits the profile. But what does all this have to do with my Tom Joad story? Nothing. But it has everything to do with a “Jim Toad” story. (“Why does he keep saying that? Are there toads??”) Give it a look, you’ll see. And if you’re my neighbor, hey, can’t a man say “I’m sorry!’ and “Fuck you!” at the same time? Can there be neighborly redemption a year later? Is the Tom Morello-shredding live version of “Ghost of Tom Joad” a jarring mistake?? Was this his reward for doing that great cover version when he was in Rage Against the Machine? What were his hands doing in that video??? (if you watch the clip, check out the dude from The Sopranos just slinking away from guitar heroics like that) Do geee-tars work even like that?? All these questions will be answered very soon.

They haven’t published the full table of contents yet, but I’m going to read all these story songs I keep hearing about. I know everybody always says that about the collections they’re in, and then they never do it. But there’s a reason we gathered here. We all got Bruce fever. And I’ll tell you right now whose song stories I’ll be reading first because of mad curiosity about how they made a story out of these tunes that have long been favorites: Court Merrigan’s “Promised Land,” Steve Weddle’s “Meeting Across The River,” Ryan Sayles’ “Highway Patrolman.” Mr. Sales has got some big shoes to fill here. Not only is that song already a fully-fleshed out story – possibly one of the most fleshed-out story songs in all of music outside of the 900 versions of “Stagger Lee” – but also Sean Penn already made a goddamn movie out of it! And a good one. No idea what he’s gonna do with that. Dennis Lehane’s “State Trooper,” of course, not just because he’s clearly the most famous judging by his giant name (head) on the cover, but I’ve always thought of that song as “Frankie’s” story, the brother in “Highway Patrolman.” I’ll want to see what Keith Rawson does with “My Best Was Never Good Enough,” and Chuck Regan’s “Radio Nowhere” (love that noisy opening tune), Les Edgerton’s “The Iceman” has got to have something to do with that crazy hitman, right? Todd Robinson’s, too, because I bet someone ten bucks his last line would be “We Take Care of Our Own.” I’m surprised no one grabbed “(American Skin) 41 Shots” for a story. I’m surprised I didn’t do “41 Shots” actually. How perfect would that song have been for a story? What the hell was I thinking? What else? Chris Holm’s “Mansion on the Hill” will be good. Love that song’s narrative, and the odd Crooked Fingers cover version off the Badlands tribute album is weird and great. Proceeds from Badlands went to Médecins Sans Frontières (Doctors Without Borders). Speaking of that other tribute, Paul J. Garth will be on my radar, too, because the version of “Nebraska” on that tribute album back there is, in my opinion, actually better than Bruce. Blasphemy, I know. Something about a woman singing it, I think. I don’t know. And when she’s sitting in the electric chair and says she wants her baby right there on her lap when they pull the switch….. chills. I’ve always wondered about that line though. Does she want her lover to die, too? Or is that just a murderer’s idea of romance. I vote romance. There’s still a heart in “heartland,” right?