Stealing Propeller Hats from the Dead

spiders are our friends > Stealing Propeller Hats from the Dead 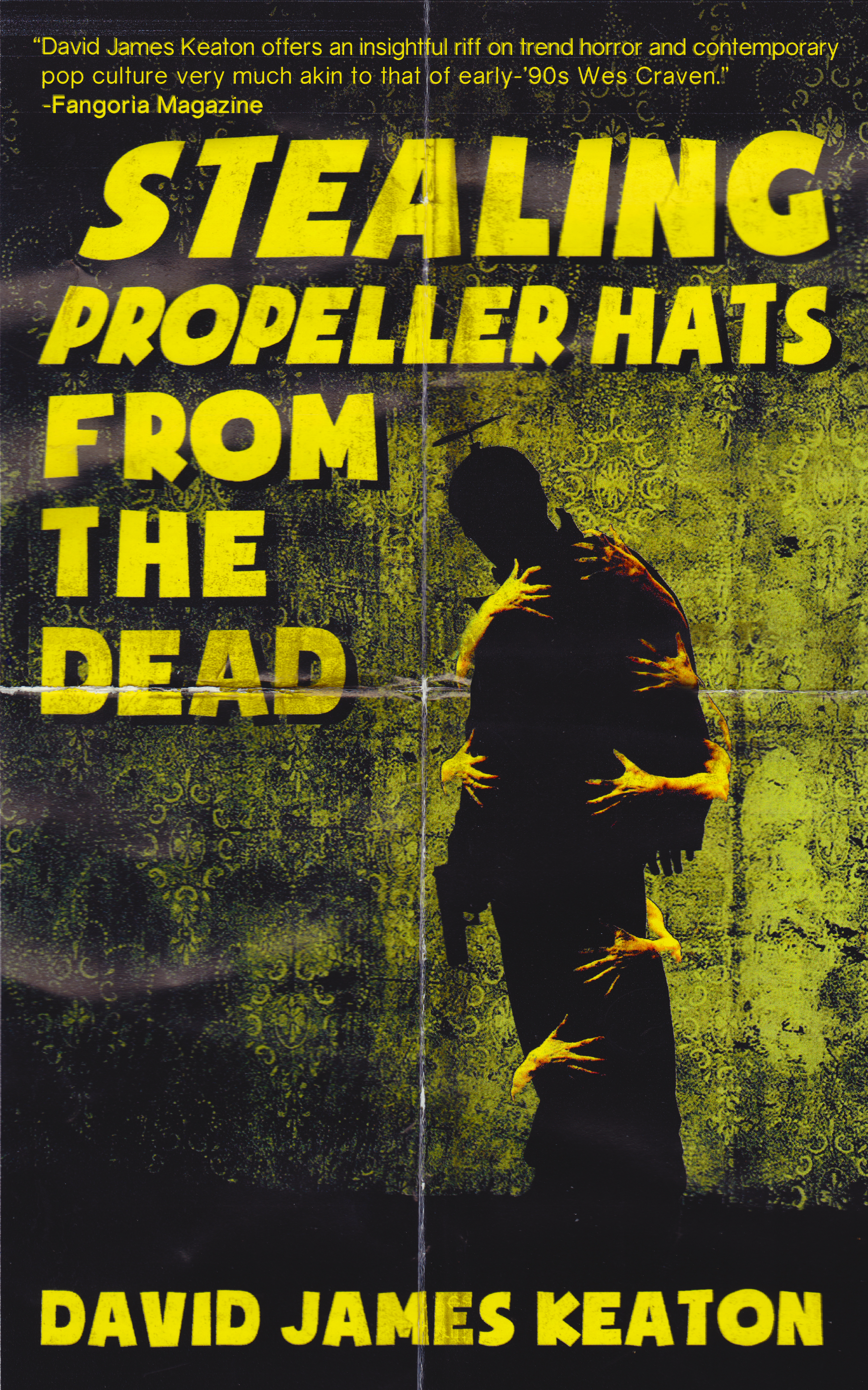 This collection of “zombie” fiction is available at the usual haunts, but you should probably get it from Powell’s, because I signed a couple when I was up there. I also signed a bunch of Stephen King books, too, so check all your books for my signature.

Here’s the Facebook page for the book, where I post all things zombie, and here’s the PMMP Newsletter, where you can read some early blurbs and find out who won that crazy contest. See that? Despite what some readers were claiming, the answer was not impossible!

I also did some readings to promote the thing, including my first trips to San Francisco, Alcatraz, and Pegasus Books in Berkeley (hat trick!), where I had a blast at Lip Service West, a reading series hosted by Joe and Justine Clifford. 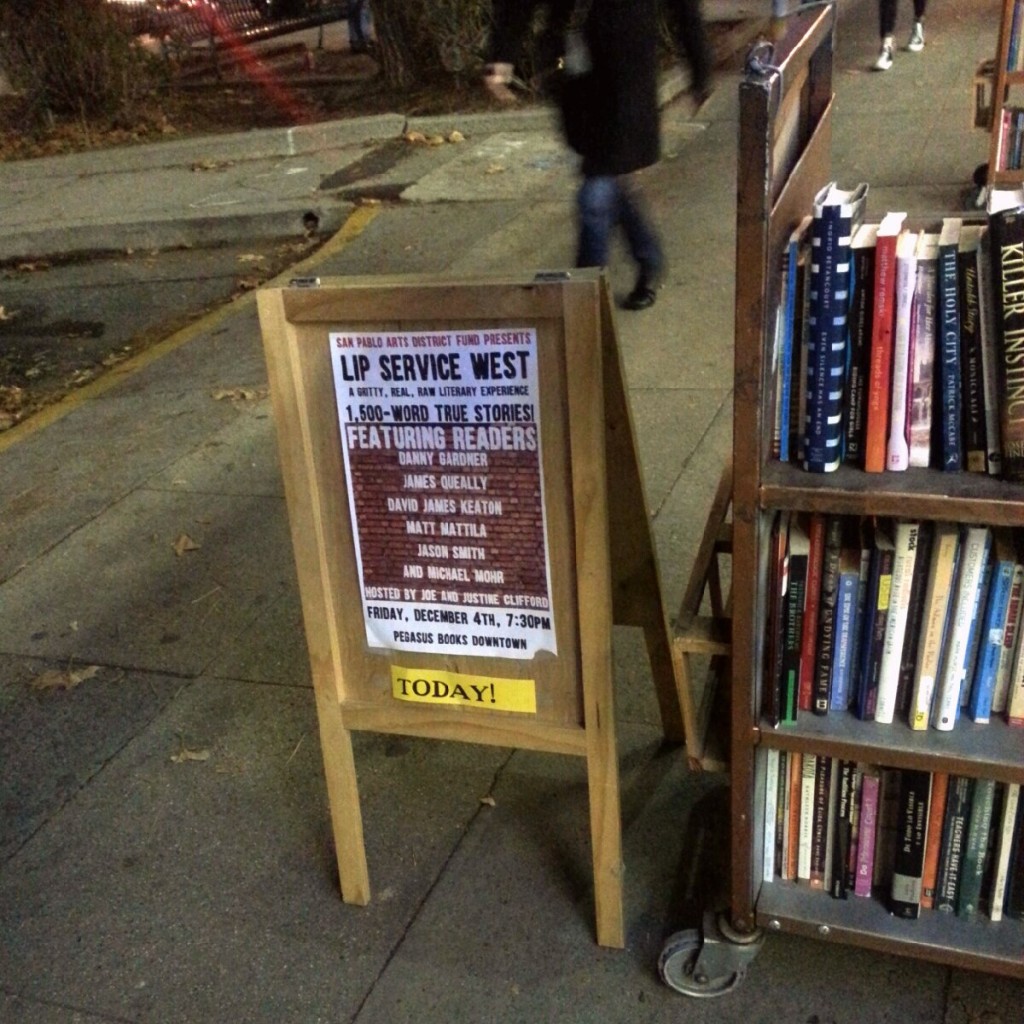 I also did some interviews here and there, like this one at Scrivener Soapbox. And then once the controversy surrounding the Hardest Trivia Question Ever finally died down, I hung out with the This Is Horror crew again to talk about the uncommon but sometimes fruitful intersection between comedy and horror (and zombies). And over at LitReactor, along with some other job-related banter regarding The Strange Day Jobs of Five Fiction Writers, I talked about the time I almost, not quite, but sorta, but not really, but if you want to get technical, yes, drove repossessed cars. I wrapped up the year reading a selection from Stealing Propeller Hats from the Dead, an exclusive story found only in this collection, which may or may not have been recorded in the worst New Jersey bar of all time. I know, I know, that’s all of them, right? Anyhow, click here to listen to “…and I’ll Scratch Yours (or The One Who Had None),” just in time for whatever Christmas happens to be coming up.

Hey, maybe you’ll get a new back-scratcher under your tree if you’re bad, like I was (author photo by Dyer Wilk)… 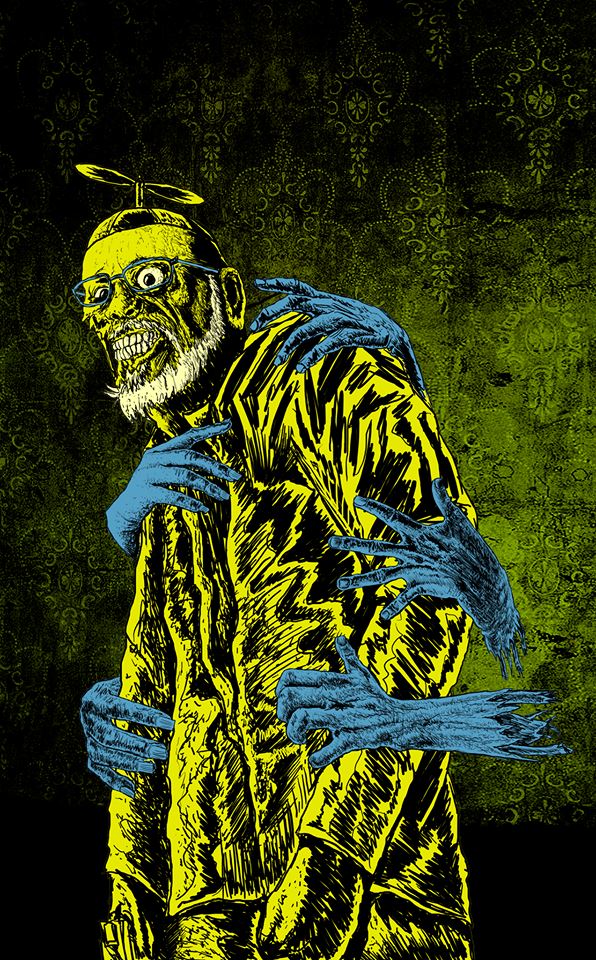 Reviews have started landing, and I’ll post them if I can continue to remember to blow the dust off this site. But this first review right out of the gate was killer:

Publishers Weekly gave Stealing Propeller Hats from the Dead a Starred Review. They said, “The collection’s ironic B-movie sensibility taps into the ongoing obsession with zombies and what they represent: the thin line between the human and the monstrous, and our desire to be scared. Decay, both existential and physical, has never looked so good.”

Someone got excited and took a picture: 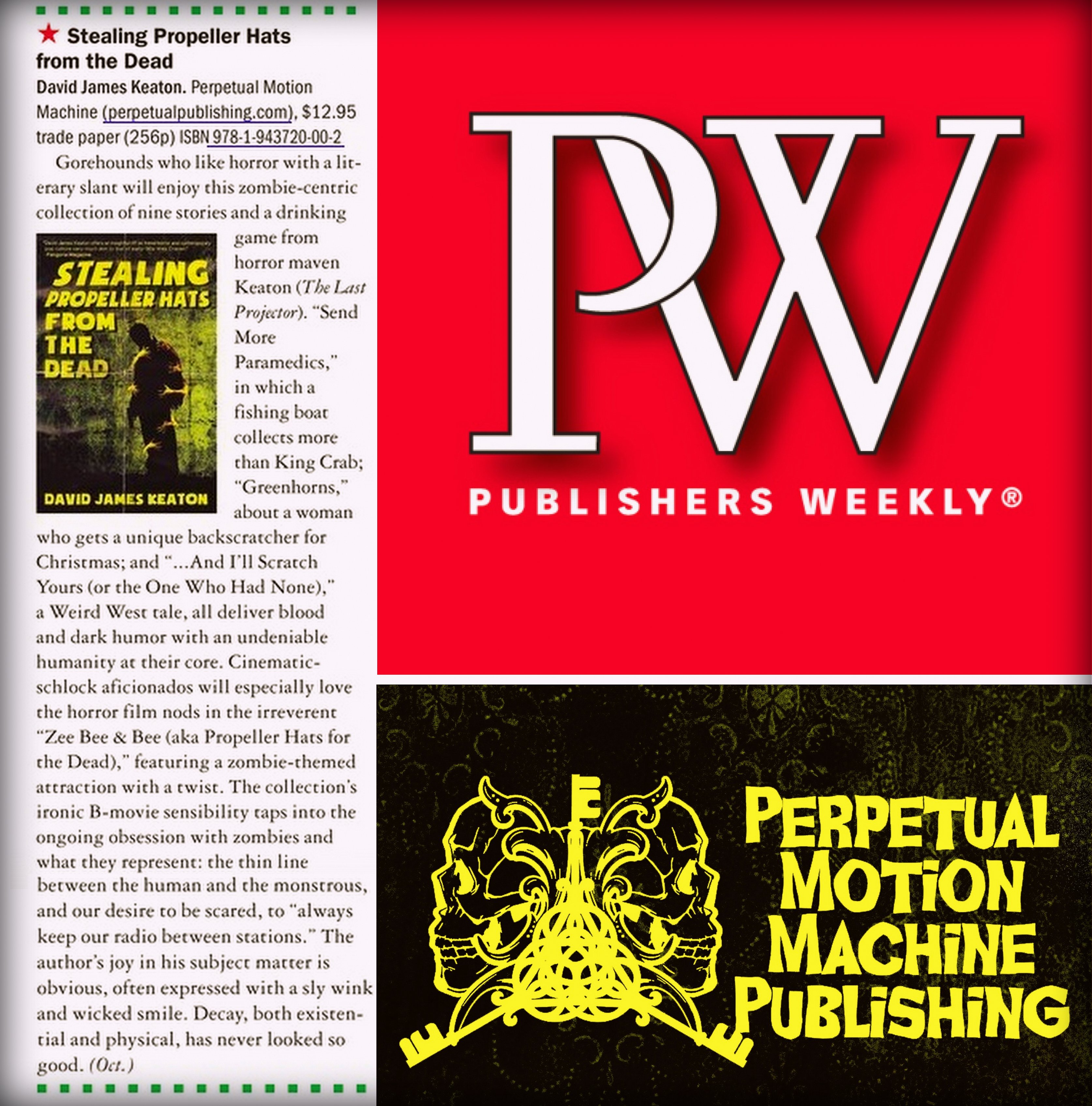 If you’re looking for a new Bingo (Zingo?) board, below is a collage of all the individual story illustrations you’ll find inside Stealing Propeller Hats from the Dead. Artwork by the amazing Luke Spooner, a.k.a. Carrion House. 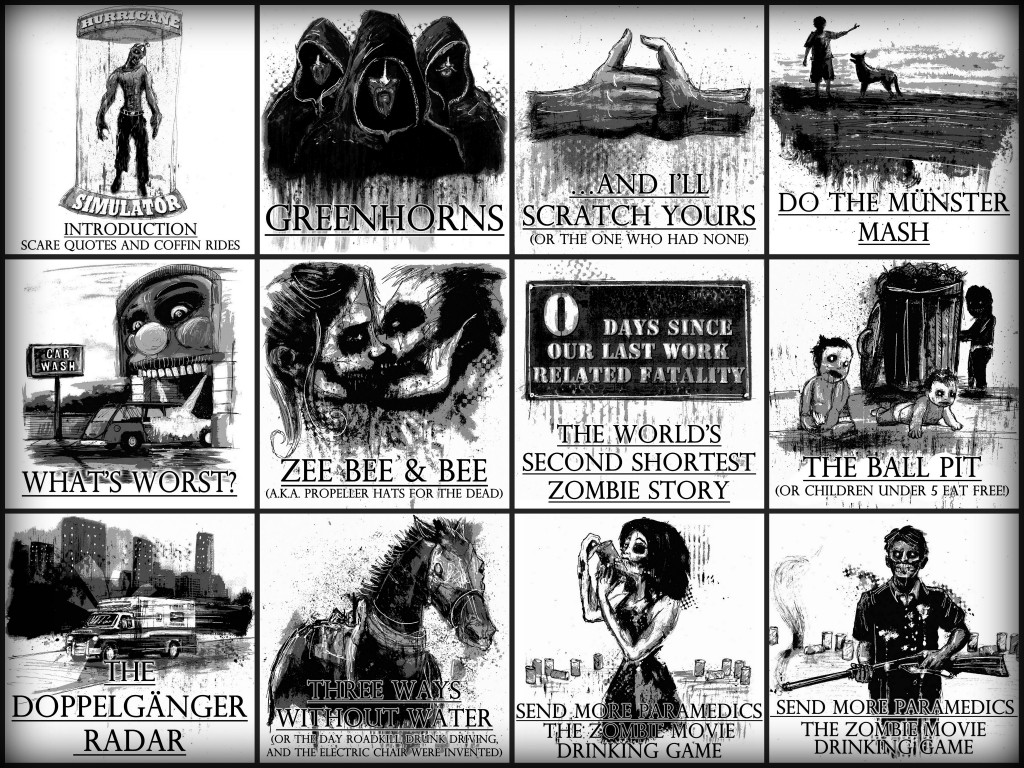 Notice the last two are both illustrations for the drinking game. This is because we asked Luke to draw a “zombie shotgunning a beer,” and his first drawing came back wonderfully literal-minded, with a zombie actually blasting the beer with a shotgun. We quickly realized that they must not “shotgun beer” in the UK. But the better question is why do we do this in the U.S.? Or maybe we’ve been doing it wrong for years.

I’ll post some pictures of the shot glasses and drinking game promos that we came up with once I get some… oh, shit, here they are… 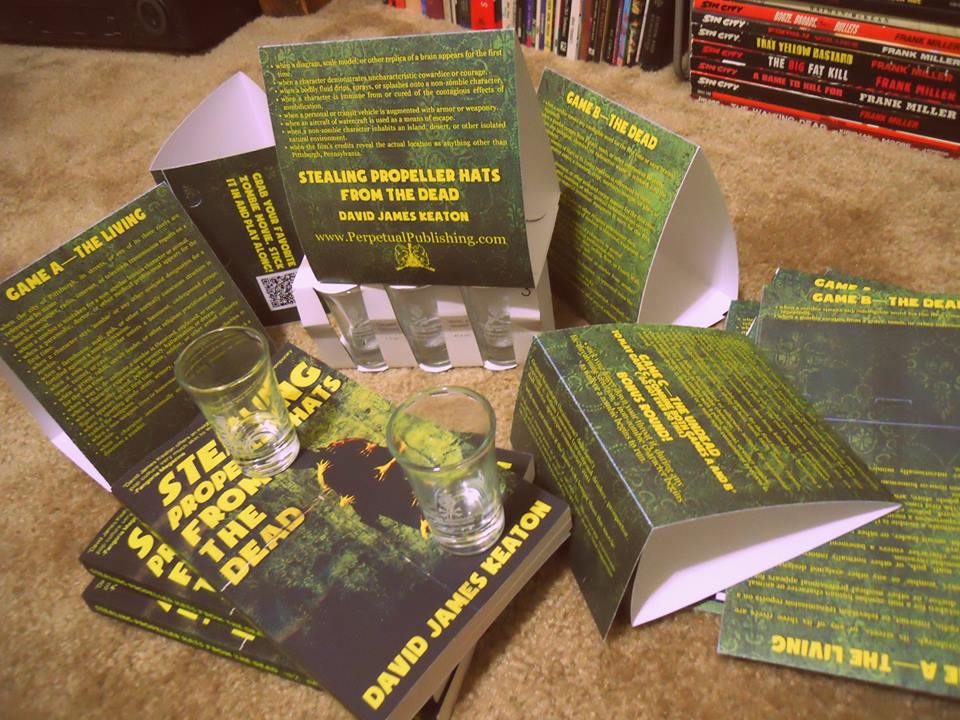 So, that’s it for now, folks. Until then, my crazy cat with thumbs will be playing Twister on these things. 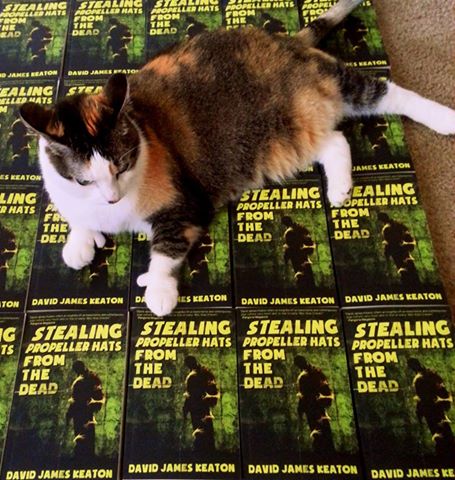