Update: this book is finally out of the garage and you can get yours here. That phrase sounds weirdly threatening, I know. But do it. Get yours.

So, the upcoming Hoods, Hot Rods, and Hellcats project I was rambling about now has an active IndieGoGo page (kinda like Kickstarter, except that Zach Braff is not allowed to use it for gas money and blow). Click here or here or here to read all about the fundraising campaign or to let Chad explain why and how you can be a part of this. And the book is looking better and better. Artwork by Skott Kilander. Introduction by Mick Farren (this guy has written over thirty novels, and a dozen nonfiction books, four on Elvis alone!), and there are pin-up prizes and original songs, even switchblade combs, depending on your level of contribution. Why contribute? Well, there’s those things I just said, but most of all, mastermind Chad Eagleton had this crazy idea to… pay the writer! What?! It’s shaping up to be quite the event. Please, if you’re strapped for cash, maybe just spread the word? 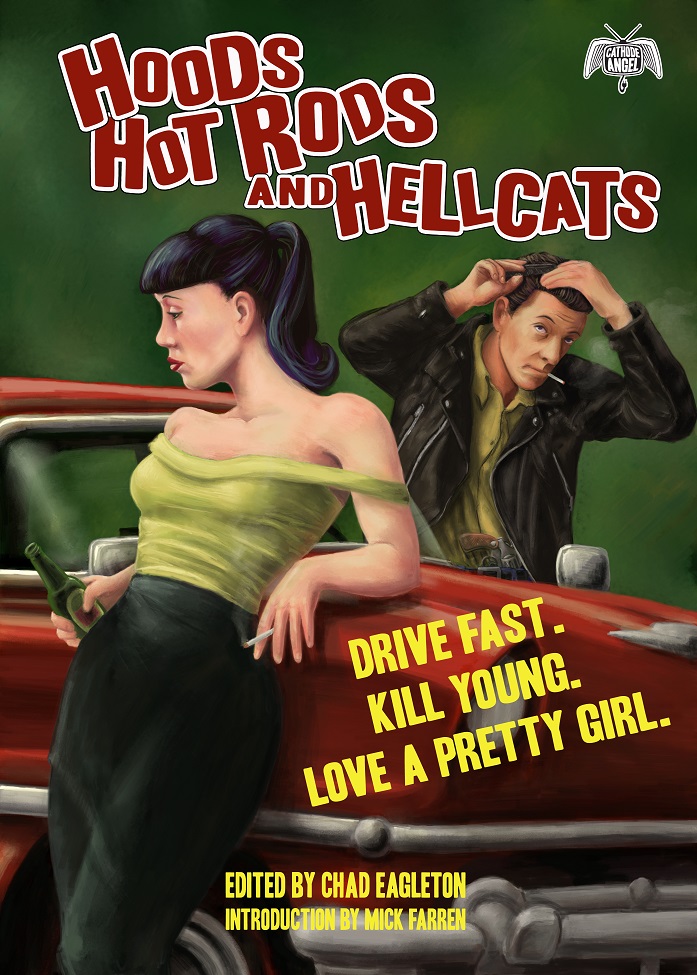 A couple weeks ago, our editor posted a picture online of the manuscript with his red pen hovering, and I was able to catch a glimpse of the story titles and authors sharing the rumble seat. Nik Korpon, Matt Funk, Christopher Grant, Heath Lowrence, Thomas Pluck, Eric Beetner, and Chad Eagleton, the fevered brain behind the whole beast. It’s gonna be greasy. It’s gonna be Wild Ones and Elvisidal Tendencies and a ton of exhaust fumes. There have even been rumors of irresponsible motorcycle handling during inclement weather.

My own contribution, “Headless Hoggy Style,” can only be found in this collection, and it’s the longest, looniest thing I’ve written in awhile. (At first it was called “Rumble,” then for awhile, “Jake Braking,” then “Jake Breaking,” then “Rumble” again for a second, then all the way back to “Headless Hoggy Style,” because that’s the name his mama gave him!) A little preview of what it’s about. First off, our editor told us to indulge in longer stories here, so this ain’t a flash party. In fact, my story started out right on the verge of “novella” koala-fications (speaking of, tell me a koala isn’t genetically engineered to cling to the back of a motorcyclist), and it’s kind of about two generations of “Jakes,” and the girls on the back of their bikes. I’d call it sort of a one-upmanship competition gone wrong if it didn’t already start off wrong. But I don’t want to give away what happens. 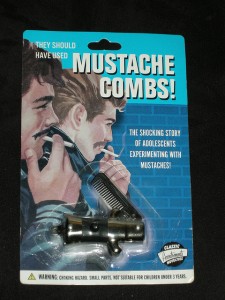 Valid as currency in all fifty states.

Just as a teaser though, I will say my story was birthed a few months ago in the middle of the night when I asked the internet for help answering the age-old question: “Can someone have sex with a motorcycle?” Glenn G. Gray came to my rescue with some scary science. It also contains a game that I dream about playing quite often, “The Princess and the Pea” (but using a pool table for the bed and M-80s for the peas). Hopefully, this makes sense later. Saying any more about the greasy noir in here would be cheating, but from what I’ve seen, everybody involved took a look at the ’50s from a crazy different angle, an angle way closer to weird, which if our world is any indication, is a lot closer to reality.

Also, if you get a chance to click on that fundraising page here (or probably even here) you can get a better idea what the other authors have cooked up for you. Wait, did I see something about a “stash of lurid paperbacks”? Did I see something else about a “stuffed rabbit”? Who is running this show??

“The world of Hoods, Hot Rods, and Hellcats is a dirty cocktail of fact, fable, fears, and fantasies. The 1950s are recreated one more time, but here it’s with a savage, razor-honed edge you’ll never find in Grease, Happy Days, or American Graffitti…” 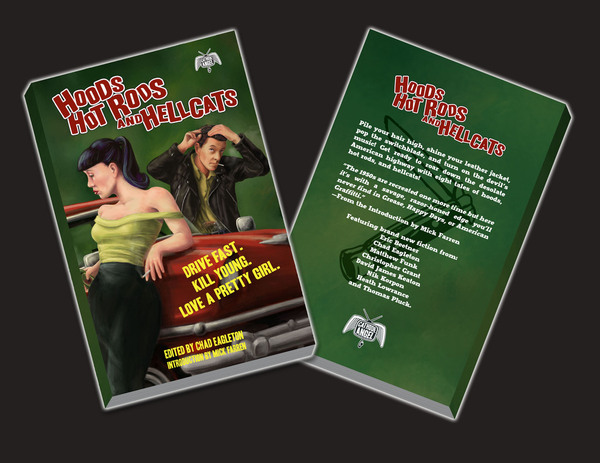