spiders are our friends > The Last Projector 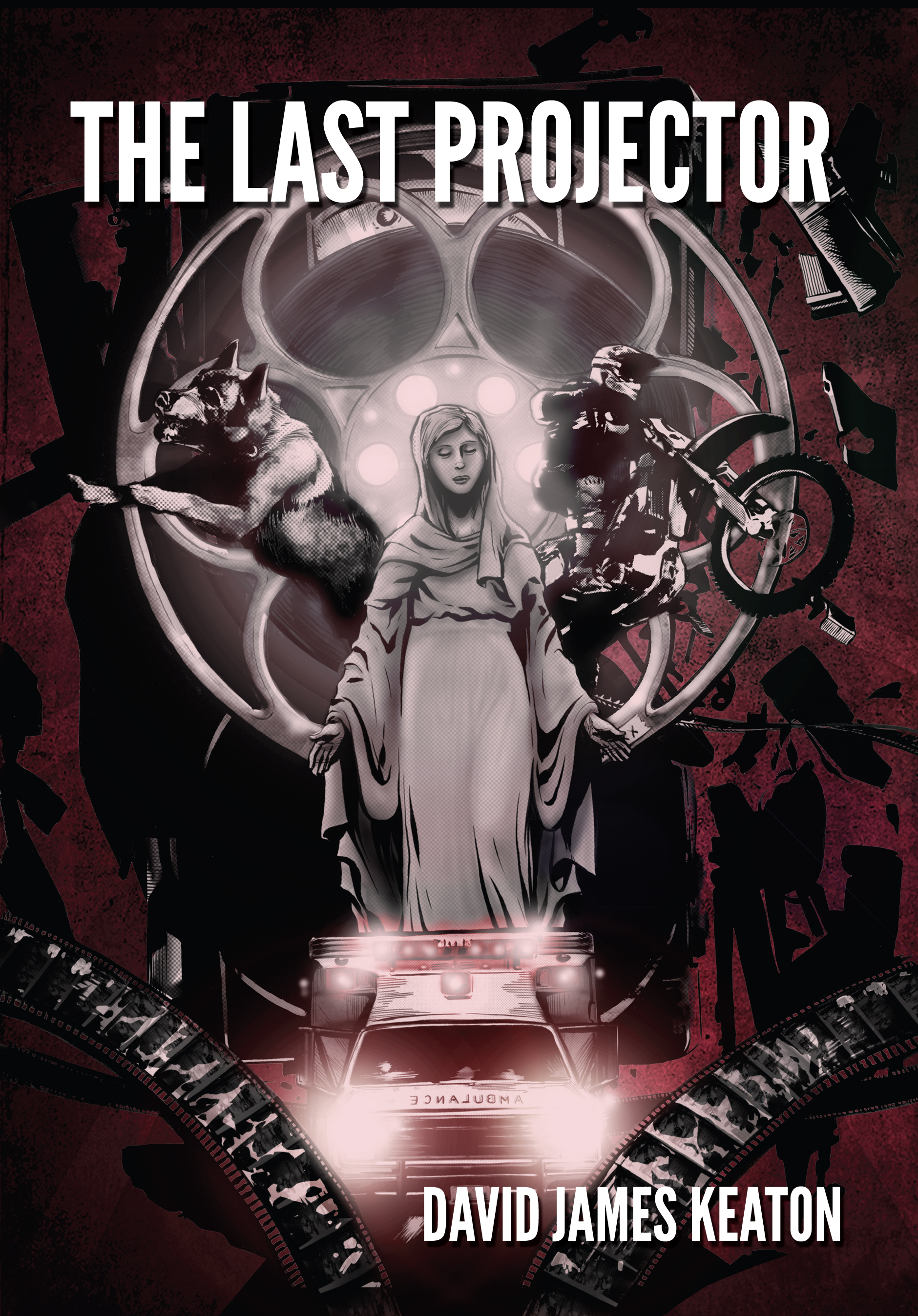 If you’re looking for Projectors, there are three to choose from over at Broken River Books. You can get hardcover, paperback or electronic (and here’s the Goodreads link, if you feel like throwing down a review). Each version of the book has a different cover. Since the hardcover was designed to look like a big ol’ VHS tape, the paperback is like… its soundtrack. Check it out. Design by Dyer Wilk. Art by Joel Vollmer:

For the electronic version, we tried something a little different, then finally coming up with an exclusive animated cover, which we wasted on this guy. Here’s a sneak peek. It was essentially a blatant attempt to hypnotize you:

Other bad ideas included hijacking someone else’s movie trailer and pretending it was for this book instead. We finally enlisted the help of Nathan Lamoreau to create a book trailer of our own. But the most scandalous promotion was probably the The New York Times review from the ’80s that was found via time machine: 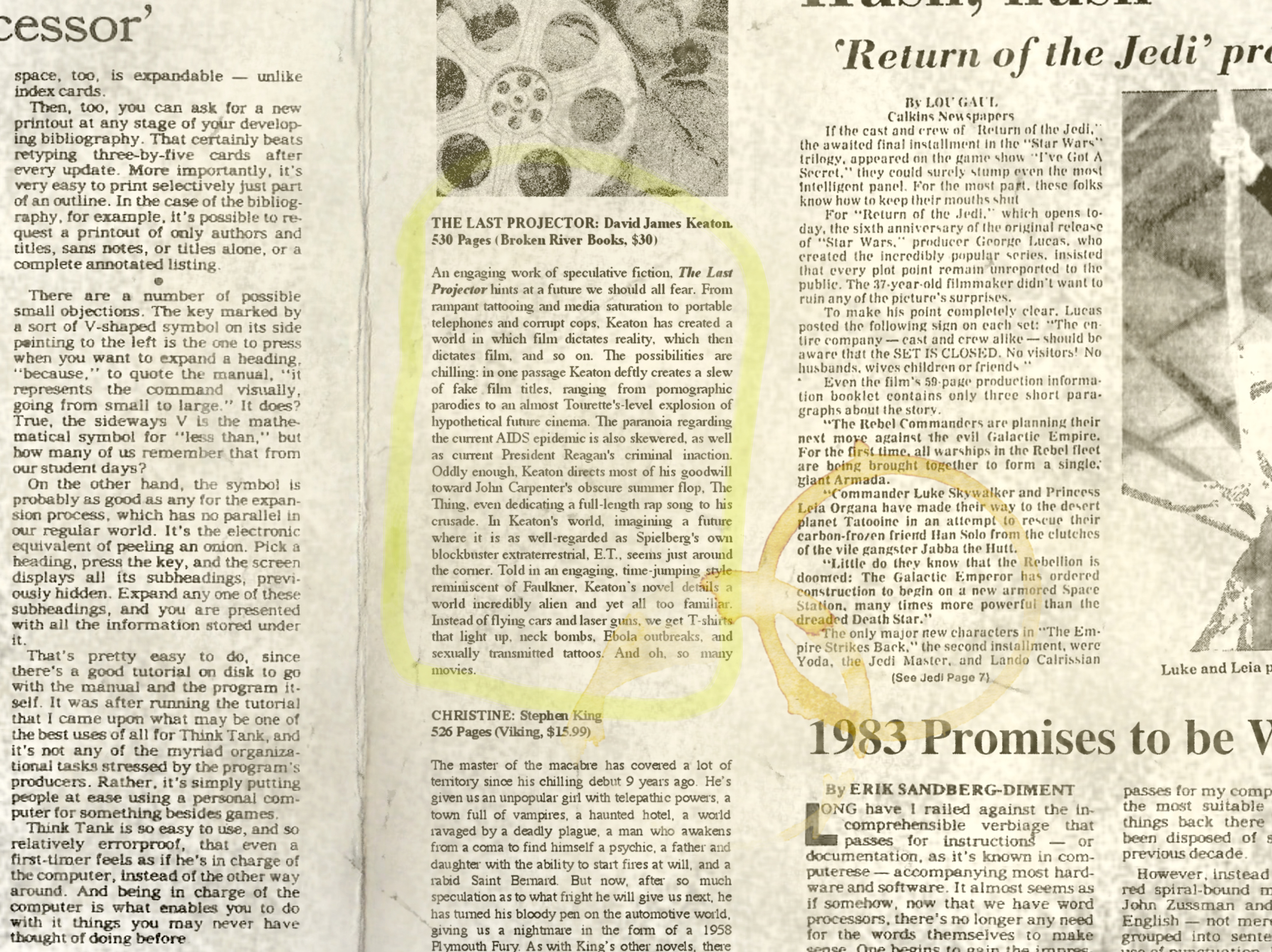 Pretty prestigious publication, sure, but messing with time and space? At what cost, right?

Here’s a greatest hits of Last Projector-related shenanigans I was up to in lieu of a legitimate book tour:

Okay, let’s see, among the internet fun, there was a favorite author of mine over at This Is Horror telling people to be on the lookout for my novel (also, one of the two books mentioned by Stephen Graham Jones here got a shout-out by Stephen King himself, a hint, it wasn’t mine). I also did an 8,000 word interview with Simon Jacobs at Angry/Safe, probably my favorite movie talk ever, where I think we got to the bottom of everything regarding violence and film and everything that was on our minds that year. What else? We had a contest where people had to zoom in and decipher what movie was depicted in the film cells on the hardcover artwork (another hint: it’s not the one you think it is, it’s the remake, which rhymes with “mistake”), and soon after we went up to AWP in Minnesota with a stack of Projectors and sold-out at their book fair. I also did a reading at Boneshaker books with the rest of the Broken River Crew, including Anthony Neil Smith, who was recently unmasked as the author of XXX Shamus, a book I’d lied about being the author of just weeks earlier.  Gabino Iglesias (author of Zero Saints) told people over at Revolution John that my book might “ruin your goals of ever reading other books.” I did some podcast interviews and a St. Louis reading for the now-defunct Books and Booze, did some more Noir at the Bars, including one I hosted in Louisville before we left town, on February 14th, calling it The Valentine’s Day Vernacular Massacre. Jed Ayres tried to find some rhyme or reason to the glut of dogs in novels lately, or dogglegängers, to be precise, then he had an out-of-body experience with my book. Punchnel’s in Indianapolis was kind enough to invite me up for a Second Story Writer Night, and to return the favor, I judged a fiction contest for them, selecting the best “hybrid” stories from a very eclectic, fascinating stack of submissions. I later read a Last Projector excerpt with the winners. Elizabeth A. White let me stop by her turf to talk about the inspiration behind the novel (mostly the cover), and the movie posters that inspired both. Then I led the Indy Word Lab sponsored by Metonmy Media, where we all did a writing exercise at Indy Reads Books, where I wrote on their pillar of fame with a marker that ran out of ink (symbolic ‘n’ shit!). The year wrapped up for me with a trip to NoirCon in Philadelphia, where I participated in something called Three Minutes of Terror. At this event, if you didn’t finish your story under three minutes, the MC revved a toy chainsaw in your face. If you listen close to the recording, you can hear this happen at least once. It wasn’t me, but it might not be a surprise who got chainsawed. But that was a much shorter version of my reading at Noir at the Bar in Chicago, so if you want the director’s cut of that x-rated scene (back when The Last Projector was just a novella called “Tap, Tap, Tap”), stop by Crimewav instead.

On social media, Broken River Books, Dyer Wilk and I went a little promo-crazy, which is way healthier than porno-crazy. “The Ultimate in Italics” tagline was my favorite because, yeah, it’s gotta lotta italics:

And here’s a hyperlink party for the rest of the reviews, raves, or head-scratching around my first novel: