“It is the green-ey’d monster, which doth mock.”
-Iago

The special nipples-and-tattoos edition of Needle is out, and I burned through this thing in about a week. So much good crime fiction in here, and I’ll try to hit on all the highlights. But first, I was going to keep up the habit of firing off some background on stories I’ve written. So here’s a little history of my story “Schrödinger Rat” that’s tucked in there, too… 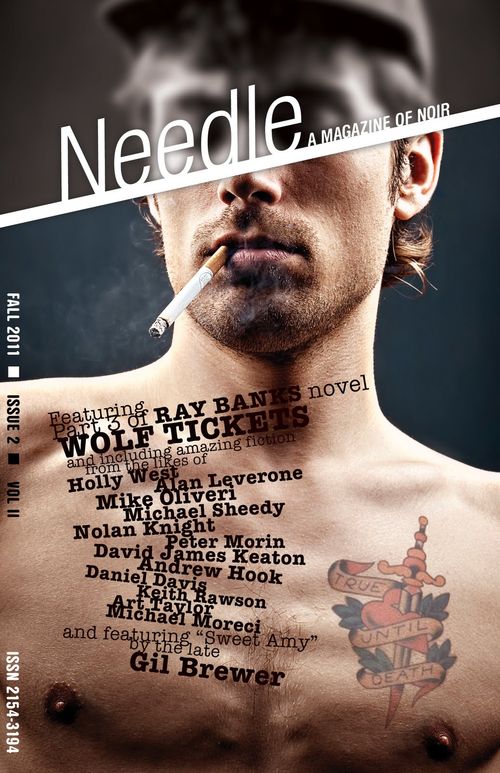 This is what happens when you leave a magazine out in the cold. They’ll cut glass. (Probably cut class, too! Just look at this dude. No way he goes to class)

I’ve actually been kicking around different incarnations of this tale for about ten years. It’s the bastard son of prison-movie screenplay I wrote with my dad in a hospital waiting room, then subsequently submitted to Project Greenlight to usher in some heartbreak and sour grapes, but that’s a story for another time. 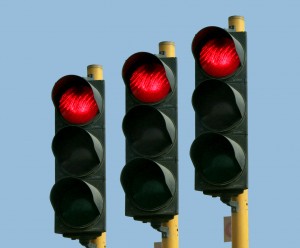 One good thing about Brickhouse though (it was totally, like, a Three Little Pigs allegory, dig it???) was all hypothetical soundtracks I made for it in my spare time, even before I started typing. The track list included anything I could find with “pigs” in it. So lots of Cypress Hill, some Nine Inch Nails, more Cypress Hill, and then, just for kicks, some Cypress Hill. In fact, I spent so much time making soundtracks that it’s a miracle I ever finished the damn thing. But why would anybody need to? Once you have the soundtrack in your hand, the movie is in your brain. You’ve cut out the middleman more effectively than anyone could have imagined. 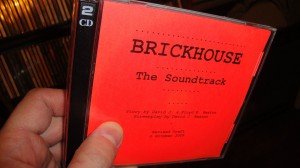 Double album!? Told ya it had a lotta Cypress.

But one day, I did stop singing along to the CD long enough to get something on paper, and after the Project Greenlight got done”Nope-ing” me to death, I pouted a bit, then decided to adapt it into a novel instead. Yep, that’s backwards. And I got a few chapters in, thought I wasn’t making things hard enough on myself as it was, and decided to condense the entire thing into a short story! Then that failed. So I tried to take a couple of the concepts and favorite speeches and rewrite the whole thing with the prison itself telling the story (I’d just discovered the collective “we” of Jeffrey Eugenides’ Virgin Suicides). And, suddenly, the story felt like it was working. Meanwhile, in theaters, Robert Downey Jr. was on his ninth comeback with that Sherlock Holmes movie, and around the same time there was a contest in a journal about writing a “London” sorta story, and another magazine was having a U.S. Vs. U.K. issue, so I decided, “Hey, let’s send Sherlock Holmes (or a descendant of Doyle) into this weird prison I’d constructed and see how he’d fare.” Combine that idea with a summer of Lock Up on MSNBC, stir the pot, and boom, “Schrödinger Rat.” I sent it out. And Needle Magazine finally said, “Yes,” (after I chased them for a year), and me and my dad high-fived. Then he said, “Wait, what did you do to our script?” I gave him a copy of this issue, but if he’s read it yet, he’s made no indication. He still talks about casting our movie (Clint Eastwood in all the roles), and I still make soundtracks for it… 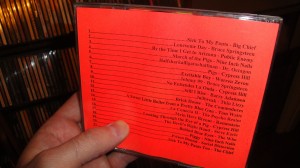 The greatest hypothetical soundtrack of all time.

Well, how about the rest of the new issue of Needle, you ask patiently? Yes, so good. I’ll start with the Gil Brewer story, “Sweet Amy” and jump around. I read it backwards like everything else I do.

First off, Google this guy so I don’t have to explain who he is. I’ll wait. Okay, see, that was an interesting guy. And the fact that Needle dug up this story to give it its day in the sun is good news for all of us. You can feel the mileage on this man in the prose, for one thing. And it’s also the most romantic thing in this collection. Seriously. You know that song by Dr. Hook “If You’re In Love With A Beautiful Woman?” Yeah, it’s nothing like that. Well, maybe if instead of saying, “You watch her eyes,” the song said you should do something much more drastic. Also, check out when the poor hero gets mocked when he goes shopping for swimming trucks! Poor bunny.

Then there was Michael Moreci’s “Anonymity.” It says in his bio that he’s a comic book guy, and it kind of shows.  Maybe I’m just imagining this since I read his bio before I read the story (I told you I was reading it backwards), but there seemed to be lots of visual cues to position the mind’s eye while reading. Good story, but I really dug how easy it was to imagine the scenes more than anything.

Nolan “You Gotta Bleed To Feed” Knight’s story, “Bleeders Abound,” was a seedy street tale that was oh, so nice and long, too. Please, magazines, don’t get too caught up in those word counts. If it’s good, let it run loose awhile longer like this.

What else? I should mention that maybe it’s because I read this in the wrong order (I really wanted to finish “Wolf Tickets” first) but damn if the second half of this collection isn’t home run after home run.

I do have to wonder how I would have felt reading Ray Banks’ “Wolf Tickets” at once (or in a couple sittings) rather than the way I did, with Needle stretching it out like a serial because reading it like this really suits it. It’s dialogue heavy, divided up perfectly, and I really was anxious to find out what was gonna happen. You could/should read all three parts when it’s finally released all glued back together (that’s gonna happen, right?) or better yet, get the three issues of Needle that they’re in. You should probably do that actually, because then you can read Cameron Ashley’s story in the last issue, “Dog’s Breakfast,” that takes place on the exact street corners and cafés where I stayed in Australia. I know you’re like, “why would I care about that?” Because maybe you can picture the same horrible things happening to me that happen to his Fitzroy dead enders? Maybe just read it because it was a great issue. It’s got a girl on the front with a belly ring. Anyway, “Wolf Tickets.” It’s got that great multiple perspectives thing, revenge, shotguns, crowbars and crowbars, and “plans, plans, plans.” It goes fast.

Another gem was Holly “What’s In The Box?” West’s story “Once A Loser.” This one has a great hook, a mysterious letter from the recently deceased. He leaves his uncle a key, some cash, and a note saying something like, “Open the box under my bed, deliver the goods to my friend. Try to make something of yourself.” After that, I’m in. And I’m asking myself, “How long before Lenny screws up something that sounds this easy?”

Keith Rawson’s “Fearless Zombie Killers” has probably my favorite ending in the collection. I don’t want to ruin anything, but he wraps up the proceedings with a finale that equates two outrageous story lines, one more outrageous than the other. Maybe it was just me, but it somehow makes the tall tale that opens the show a bit more legit, while making the reader almost doubt the truth of one they just lived through. It was a deft move.

Another standout, Art Taylor’s “The White Rose of Memphis” indulges in an irresistible plotline, that bed-and-breakfast murder mystery weekend thingy gone awry. This is always potential for some fun. And this one was a lot of fun. You gotta love it when a character says, “Is that a real gun?” and someone goes, “Blanks. It’ll sound real loud, and they’ve even got it rigged to leave a couple of smudges on the ceiling.” Yeah. Right. To answer that character’s other question, “No, they did not have ski masks back in the ‘40s.”

Great stuff as always from a magazine that Steve Weddle said he created so you’d have something “to smack your cat with.” Well, the cat has been smacked (That was a lie. I’d never smack a cat unless I caught it smoking). So, that should do it. I’ve read three issues of Needle now, and every one of them read like a Greatest Hits. Get some.

p.s. the Project Greenlight season with Feast totally rocked though, and, yes, Affleck was the bomb in Phantoms, etc. etc. 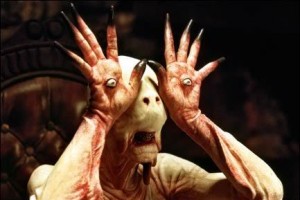